There’s nothing better than running a race and seeing your teammates on the course!

Team Galloway LI decided to run this Seaford Hot Chocolate 5K Race as one of our scheduled Saturday runs. Not everyone showed but most of the group was there. 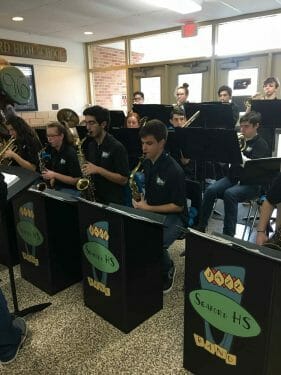 Merril and I got to the Seaford High School about 8:30 am. The race was scheduled to take off at 9 am. As soon as we walked in, we saw the Seaford HS Band performing Christmas Carols. As we were walking into the auditorium, I received text messages from Rebecca and Michelle telling me they were there.

We entered the auditorium and I was pleasantly surprised to see Tara and Veronica, two of our members who just completed the NYC Marathon. They did it in just over 5 hours and I was so incredibly proud of them! We were talking about the marathon. Veronica told me they were doing it again in 2018. I smiled.

“We did it this year to finish it. Next year, we’re going to do it for time,” she said.

I totally understood that, knowing that if I were to do it again, I would definitely come in quicker than I did the year I ran it.

It was so good to see Michelle. She just recently re-joined the group. Linda was there too along with our two newest members, Kathy and Pat. The announcement was made that we should make our way to the course. 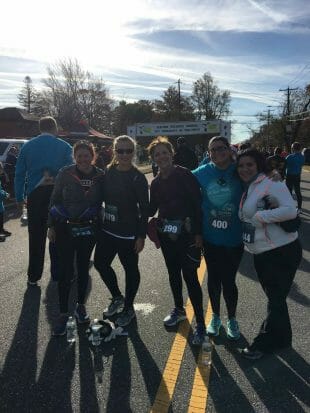 I walked with Rebecca and her friend. “Why are we going so far back,” Rebecca said to me at the start line.

I laughed. “Really? I thought you would want to,” I said.

She shook her head, “not any longer!”

I was feeling so proud of her for coming so far in only one year. (Last year, she never even ran a block and now, she was finding a 5K easy!)

The gun went off. Terry, the announcer, made the call and we were off. “See you later,” Rebecca yelled after me.

As I ran, I saw Linda and then I saw Laura. I didn’t see her in the beginning so I was so excited she was there. Everyone in the group loves her, including me. She’s such an amazing person that motivates everyone!

Laura gave me a high five.

I ran off. Then I saw Pat and Kathy. Since they were new to the group, I asked Kathy if she had a timer. She said she did. These women were running fast! It was great to see them… I didn’t see Veronica and Tara, they must be way ahead of me, I thought.

The course was flat and fast. It felt good running the distance. I had been trying to lay low because I had an injury so I didn’t want to stir it up. I felt it but didn’t let it get the best of me. I pushed through it. 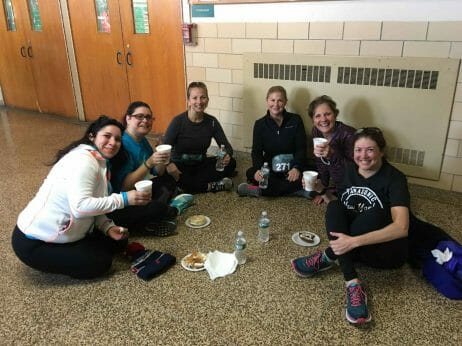 I was running 60/20 and wondered if I should have gone 90/30, I decided that I would do that on the next short race or during practice.

I was a quarter of a mile away from the finish. I could see the finish line. I put my timer away. A team of small children ran by me so fast as if were going in reverse.

As always, it was great to hear Terry call my name as I came in and of course, announce that I have a PR firm (of 25 years) and that I’m a blogger… That also makes me smile…

What really made me feel so amazing was seeing how well Team Galloway LI did during the race. As we sat on the floor in the High School, Linda was telling us that she was amazed at how many races she ran already since she’s been part of the group. Everyone in the group has been running so much more efficiently than they had been when they started.

Drinking hot chocolate was a perfect way to end an amazing morning with fantastic people!