Running the Suffolk County Half Marathon in a Nor’Easter 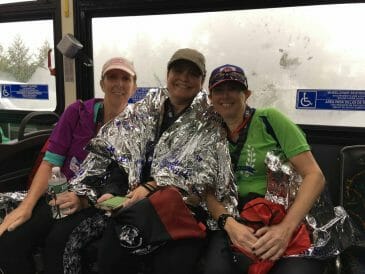 Two weeks ago, Team Galloway LI had our last training run of 14 miles. It rained. We got it done. The Suffolk County Half Marathon, a race we have been training for for the last several months, was finally here. The threat of a Nor’easter all week, kept us skeptical. However, five members of Team Galloway LI rose to the occasion and ran 13.1 miles in the torrential down pour!

I picked up Merrill, one of the team members, at about 6 am. We drove to Patchogue together and at first couldn’t find the “Verizon” lot. We circled once and then turned around and saw cars lining up. We were the third car there!

The volunteer told us to pull up on the lawn. I said to Merrill, “this is going to be a problem when we come back, just you see.”

As we were collecting our running gear, Colleen approached us. She was happy to see us and we were glad to see her too!

The rain was getting heavy. We loaded on shuttle buses to the YMCA. When we arrived, we rushed over to the Ladies’ Room but there was a huge line. We were told there was a private one down the hall. We followed some of the other runners. There was no line.

The Y was incredibly crowded. We could barely move but when we got into the Ladies Locker Room, we had some breathing space.

We got out and had about 10 minutes to spare before race time. We looked around to see Linda and Laura, our other two team mates. They were no where to be found.

We tried to inch our way to the back of the start line. We wanted the runners trying to qualify for Boston to go first.

8:00 am, we heard the horn and runners were starting to take off.

Between the app, the Garmin and the Gymboss timer, which all had to be turned on, it was a little chaotic. Then, my phone wasn’t working! I killed a lot of time toying with my gadgets.

Merrill, Colleen and I started together. I was going to stay with them doing 15/30, but I needed to pick it up and go out a little harder, so I left them. Colleen caught up to me doing 15/30 and then noticed that Laura and Linda, two other group members, were in front of us. I ran over to them. Laura gave me a high five. They both looked great! 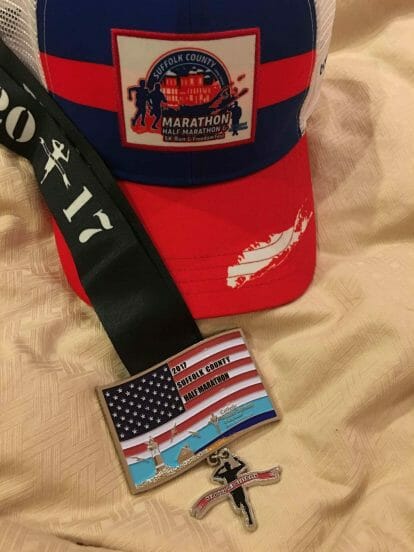 We stayed together for a little longer and then I started to run 1/30 instead of 30/30. I wanted to PR this half and I knew I lost a lot of time on the first two miles.

I left them and continued on my way. The next few miles were uneventful. They seemed to pass quickly and I was in my own head the entire time. The rain hit my body and I could feel a cool breeze but I almost had an “out of body” experience. Even though I was completely drenched, I didn’t feel the rain. It was a strange feeling.

At mile 6 and 7, we went through the grounds of a mansion and as we were exiting the area, there were lawn signs with various military personnel who served our country. Some passed while others were deployed. All were from Long Island and as I ran through this section, I became very emotional. Those men and women have dedicated their lives for us.  I said a prayer for all of them.

At mile 9, as I was going downhill through an overpass, there was a huge puddle that was unavoidable. My feet were totally drenched! The water went all the way to my ankles. I cursed. I know, I know… I couldn’t help it. I went 9 miles avoiding puddles and this one got me.

I had four miles left. I need to PR, I kept telling myself but I couldn’t gage how fast I was going because my watch was unreadable due to the rain. Suddenly, Tara Dungate, a group leader and member of the team, ran beside me. “Hi, you’re looking great!” she said. She gave me a high five, I smiled and ran on. (I started to think about her, Veronica and Diedre who were running next week’s NYC Marathon and gave a prayer that it wouldn’t rain like this!)

I kept going. I started to think about all the police officers and volunteers and I was grateful. There were so many of them in the pouring rain. It was an incredible show of community!

Every mile, there was a water stop. Bystanders were on the streets cheering on the runners, even though it was one of the nastiest days of the year. I was totally amazed.

Mile 10, I thought, there’s only another 5K left. I felt good. My knees hurt a little but I kept moving forward. I changed my run/walk/run ratio to 15/15 and oftentimes, I ended up doing 1/15 instead of 15/15. I found though, that I was running slower than I had been. I typically run a 9/10 min mile pace and walk a 20 min/mile pace but now I was running a 11/12 min/mile pace. My legs just didn’t want to cooperate with my brain.

Mile 12, I smiled at all of the volunteers and police officers and said out loud “1 more mile, 1 more mile…”

At mile 13, I saw the start line but wasn’t sure where the finishers shoot was, so I asked a police officer. “You’re right there,” he told me. I finally picked up the pace, when I heard the cheers from the crowd and heard Terry, the announcer, say, “Here’s Hilary Topper, we were waiting for you. She’s the owner of a public relations firm and a professional blogger.” I was a little confused about his comment on “we were waiting for you,” but I was grateful that he mentioned my PR firm and blog.

The volunteers gave me a heating blanket, a medal and a small towel. I looked at my time and my heart raced. I PR’d this race by 8 minutes! I was amazed. This was the hardest race I ever did because of the weather and I was excited that I finished strong.

As I waited for my team mates to come in, I was shivering. Then I saw Laura. She was supposed to come in at 3:30 and instead came in at 3:02! We hugged. I was so excited for her!

After that, Colleen came in, then Merrill, then Linda…

What an amazing day and an amazing accomplishment for the team. Everyone did amazing!

For me, the Accel gel, Accelerade drink and the Balega Socks were helpful in more ways than one. The gel and drink helped me with my nutrition and hydration and the Balega socks kept my feet from getting blistered.

(By the way, many people who parked their cars on the lawn, had to be towed!)