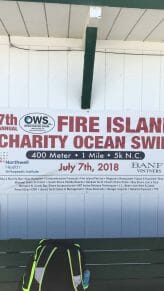 Since I learned to swim nearly four years ago, I wanted to compete in the Fire Island Swim hosted by Open Water Swim Long Island OWSLI, but I never felt like I was ready.

“You’re ready,” Bryan Krut, race director and owner of OWSLI told me. But, I didn’t believe him.

Every year since the time I learned to swim in the Connectquot High School Pool in Bohemia with Bryan Krut actually getting in the water teaching me how to blow bubbles and Coach Christine Esposito walking the length of the pool while I struggled getting 25 yards in, I wanted to race but something prevented me from doing so.

This year, I decided I was going to do it.

I hadn’t raced at all this year due to the fact that my sister had an aneurysm and stroke and was in a coma for a month before she passed. I couldn’t get my head into the training. I work out and think about her lying there with tubes coming out of her head. Then, I would start to cry. It’s been really rough on me.

But, I was determined to get this race in. I got up early and drove to Bay Shore Marina where I stood on line to get onto the 9:15 ferry to Fire Island.

As I was standing there with dozens and dozens of swimmers, Coach Christine told us what to expect. We were marked and boarded the Ferry.

It took about 20 minutes or so and then we were there.

I got off the boat and followed the swimmers down to the water.

When I got to the beach, I noticed that there was more than just a current, the water was stirring. At first, it didn’t look bad but as the morning got underway, the waves became a washing machine and there were some big waves out in the middle of the ocean.

I walked over to the water. I put my feet in. The water was freezing. I was told by the race director that it was 64 degrees. I listened to the race briefing but anxiety started to set in. Will I be able to put my face in the water? Am I strong enough to fight the chop and the current?

My coach, Danielle Sullivan of Iron Fit Endurance, told me to sight the beach and keep my head down. Can I do that?

The 400 meter swimmers went in and came out. Next, the 5K non-wetsuit division. This was the championship division. My friend Shawn of Total Masters Swimming, was swimming in this division with no wetsuit. Irene Lam, a friend from Iron Fit Endurance, was swimming in the wetsuit 5K division. Both groups took off. I noticed that with each group at least two to three people went in the water and dropped out. It was way too cold and choppy!

My group was next. The wetsuits and non-wetsuits went together. The horn went off. Some of us were reluctant to dive in. I was one of them. I needed to acclimate to the water temperature. Another swimmer was besides me. She said, “I’m getting out. You with me?”

My face was burning from the water but I forced myself to try to do this. I have to do this.

I saw Bryan Krut at the start. He was on a jet ski. “Hilary, just do the catch up drill. Focus on that,” he said.

I did. I did the catch up drill and then slowly, I started to get a rhythm. Going to the first half mile wasn’t horrendous. It was rough but the current and the wind took me. I passed one orange buoy, stopped caught my breath and went on to the next buoy.

The lifeguards in the water kept asking me if I was okay. I said I was and watched more and more people getting pulled from the water.

I finally made it to the yellow turnaround and started to head back. I went slow. Every time I took a breath, water would get into my mouth. I remembered what Danielle said, “sight on the shore and keep your head down.” I tried but it was hard. I was rocking and being tossed around like a rag doll. I could see the lifeguards in the water in my peripheral vision. Every time I stopped to catch my breath, I was asked if I want to stop.

I made it to the next buoy after the turnaround. Okay, only a few more, I’m almost done. But, I wasn’t almost done. The second half took much longer than the first.

I tried to breath out of the week side. I was thrown around by the waves. I alternated and breathed as the waves were coming toward me. I didn’t care. I just needed to be strong.

I started to think about the first time I did a triathlon in Captiva where the water was very choppy and I got through it. I loved it. I love this. Do I love this? Yes, I love this. It’s fun.

Bryan’s jet ski came toward me as I stopped. “Am I the last one out here?” I asked him.

“No, but if you were, what difference would it make? Just get it done. That will be an accomplishment!” he said.

I was about 200 meters back before the final turn buoys and I stopped. I needed to breath. I never took my inhaler (I have asthma) and my breathing was heavy. I could feel myself weezing. I’m not going to let this keep me back. I swam toward the yellow buoys. “How much longer,” I asked one of the lifeguards.

“Absolutely not! I am going to keep going,” I said.

I started having thoughts about my sister and my mother. They both were such strong women. The pain that they endured toward the end was in my head. Neither one of them wanted to die. They pushed and pushed until the end and that’s what I was going to do. I don’t know if I’m going to drown out here but I’m going to finish this race, I told myself.

I finally got to the yellow buoys and I thought it would be easy getting in, but it wasn’t. I swam hard but felt like I wasn’t going anywhere. Another lifeguard stopped me. “You okay? Do you need help getting in?” he asked.

I swam until a wave took me under and I was tumbling within it. I stayed calm. I wasn’t going to freak out. I knew it would end soon. And, as it did, I picked myself up and there was a lifeguard beside me.

I needed to walk around and met up with one of the referee’s from US Master Swimming. She was a volunteer.

“Wow, that was the hardest swim I ever did,” I said.

“I know,” she replied. “there were 40 people rescued, more than a dozen who decided not to finish, and three people taken to the hospital. If you finished, you did good.”

I went over to see how I ranked and noticed I was first in my age group. Wow, what an accomplishment.

At the awards ceremony, two older guys placed first and second in their age group and one of them said, “I guess slow and steady wins the race.”

Ha.. that definitely resonated with me. Slow and steady sometimes does win the race.