Since all the pools are still closed and New York is finally starting to open, I decided to go to Tobay with my friend and training buddy, Ray, and attempt to swim. We met at 5:45 am and walked down to the water.

Before I went to Tobay…

When last year’s season ended, I shampooed and stored my suits so they were nice and clean.  When I took it out of the closet before getting into the car, the wetsuit smelled so fresh!

I kept double-checking myself as if I were competing in a race. Do I have X? Do I have Y? Do I have Z? 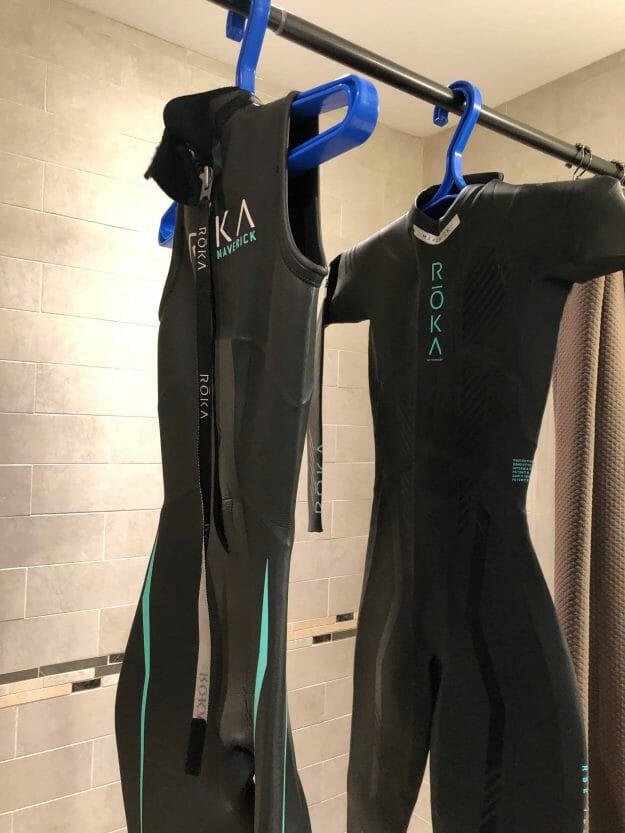 Putting on the wetsuit was a trip! I forget how hard it was to put it on. It was difficult with the few pounds I gained during the COVID-19 lockdown. I had the thermal wetsuit with me because I knew the water was in the low 60s.

I put on my booties and got all geared up and went in the water. It was freezing! “Hmmm… I wonder if it will warm up?” I thought to myself. It didn’t.

At first, I started to just float. Then, I took my first stroke. I hadn’t swum since March 1st, three months ago! I took my arm out of the water and tried using my lats to take as big a stroke as possible. My hand entered the water but the pull just wasn’t right.

I took a few more strokes. My heart was beating out of my chest. My face was freezing and I couldn’t get myself to breathe the right way. I was holding my breath. “Relax,” I thought. I had a flashback to my first time in open water when Bryan Krut of Open Water Swimming told me to practice drills. “Do a catch-up,” he said. “Then once you feel used to the water, it will feel natural.”

As I tried to move forward, I kept feeling like I forgot how to swim. I couldn’t do the drills. I could barely pull as my hand entered the water. How could I forget to swim? It’s only been three months!

It seemed like Ray wasn’t having as much trouble as I was. I felt like I was hyperventilating. Why didn’t I take my inhaler before getting into the water, I thought.

We swam back and forth along the beach. We went about a half-mile and then stopped.

I felt disappointed but I knew it would get better from there.

A couple of days later

We went out again. This time, the cold water on my face didn’t feel as bad as it did on that first day back. We decided to swim back and forth along the beach again just to get back into it. I wore fins this time so that it wouldn’t feel as hard and I could practice on my stroke.

It went a little better than the first day, but still, I wasn’t happy with my progress. I couldn’t believe how hard it was and for me, swimming is my strongest part of the triathlon.

And then the third day

By the third time we went out, it felt better. The water was just as cold. But, besides all the bugs eating us alive, it was a nice swim. The current was little to none. The water was pretty flat. Ray and I swam to the far left buoy and back. We did that three or four times and then headed out. I felt so much better than I did the week before. My stroke was still a little off and I realized I need to focus on my breathing but besides that, it was perfect!

I have to remember to include bug spray on my list!

I signed up for the EventPowerLI Mighty Montauk half distance race in Montauk with two of my training buddies – Bill and Irem. We are planning on doing a relay if the race goes as planned. So my goal now is to get in the water at a minimum two days, possibly three days a week, and working on my stroke.

Let me know if you have any tips and strategies for getting in the water the first time out after a long break. Comment below.