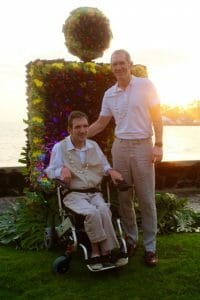 An Inspiring Triathlete Story of Johnny Agar and His Idol, Michael Phelps

Johnny Agar has cerebral palsy and had been chosen to participate in the Ironman World Championships in Kona, Hawaii this past October. He was going to race with his Dad, Jeff, pushing and pulling him, and then walk the last mile using his walker.

Unfortunately, his Dad was unable to get him to the finish line. A huge squall during the swim blew the boat Jeff was pulling Johnny in, which depleted a lot of Jeff’s energy. Even after swimming over 4,400 yards (200 yards extra) against a strong wind and current, they came in better than the time they were shooting for! They made it halfway on the bike, but were unable to make the bike cut-off time.

However, they never quit. Johnny continues to train in the hopes he may get a chance to walk that last mile on Ali’i drive at the Ironman World Championships again sometime soon. 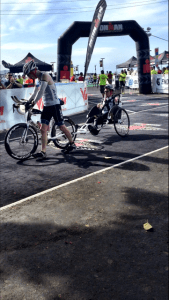 His parent’s hope is that Michael Phelps sees this, so he knows what kind of effect he has had on Johnny and his never-give-up attitude and he knows how thankful they are for his inspiration. Before Johnny amped up his training being inspired by Michael, he never walked alone in his walker. Someone always had to be pushing/guiding him, so this was a monumental step for him and an extremely proud moment for his parents. He is an inspiration to all.

Check out this inspiring video as Johnny imitates Michael Phelps’ Under Armour commercial, “Rule Yourself.” https://youtu.be/6nXzRAs4NWg.