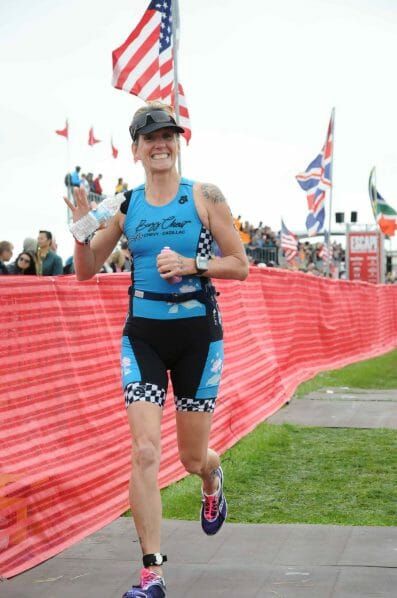 The eastern end of Long Island is flat. It is surrounded by water and it is my home. To travel across the country for a triathlon is an adventure. My adventure was Alcatraz.

Training began in January for me as my goal is IM again this year in Louisville. The training then was strength and base building, after coming back from a well-deserved rest for the holidays. I love base building as there is no other goal in my mind other than to reawaken my body, become stronger and reacquaint myself with the fundamentals of tri – swim, bike, run.

As the months sped by and the temperatures warmed up, the Escape from Alcatraz Triathlon loomed closer. Time to prep for some hills. Training became more focused and deliberate. Cold water swims, hard gears on hill climbs, computrainer rides of Alcatraz, and hill repeats of the stairs at Horton’s lighthouse. Pushing through the training is sometimes the hardest part.

Travel day came and off we went. I had shipped my bike this time with Tri Bike Transport as well as a gear bag hoping to lighten my load for the flight. It was well worth it. We had an uneventful flight and arrived in San Francisco. The weather was cooler than home so I knew it would be great temperatures for racing.

Renting a car was great as I was able to drive the bike course. All I could say was “oh my god” on the whole ride. The hills were tremendous and every downhill had technical turns of 90 or 120 degrees. The surface of the roadway was much worse than home and, of course, that was on the down hills. Just my luck. Nerves were kicking in and all I could think of was to be safe on the course. My race strategy changed to safe race, safe race, safe race. I wanted to make it back home.

The scenery on the race course was breathtaking, from massive trees to the Pacific Ocean and, of course, the iconic start from Alcatraz Island. This was a pure bucket list race for me. While the bike course scared the bejesus out of me I could not wait for race day.

Coming from New York for the race, I think, was an advantage because I was still on NY time so getting up at 3 am was easy. Walking over to transition was a nice way to burn off some of the nervous race morning energy and a good way to chat up some other racers. Once transition was set up I hugged my better half goodbye, boarded a bus and took a short ride to Pier 3 where the ferry awaited. Boarding the ferry, I sat quietly and thought of the day. I ran  the race in my mind and decided how I would tackle each part. Once everyone was on board, the ferry departed. So many people just walked around too nervous to sit. I stayed put, had a good people watch and waited for the ferry to stop.

Within minutes, we came to Alcatraz. The National anthem played and off went the pros. Watching from the deck above gave me a great view of the landmarks I needed to sight as Escape uses no buoys. After a few moments of watching the pros I realized they were not going by age group as was discussed at the pre-race meeting. Everyone was just jumping in so in line I went. In a few moments, it was my turn to jump off and after the person in front of me was out of the way, my race began.

The swim, for me, was amazing. My sighting was spot on, I turned back to say goodbye to Alcatraz and kept plugging on “across the river” as the race director kept telling us. The current is so fast and if you don’t sight, you will get pulled pretty far down from the swim exit. The water temperature was perfect as the water at home was definitely colder. I was thrilled!

I nailed the exit after some fighting with the tide pushing you away from shore and into the bag lot I went. For Alcatraz, they advise you to have a swim exit bag if you want to run the half mile to transition with shoes on. I kept my swim booties on and had no problem. I stripped my wetsuit, grabbed my bag which I did not need anything that I had packed and went off to t1. Hopping on my bike I knew I was going to be conservative and safe. The up hills had me nervous, but the down hills had me scared. Being the victim of a downhill bike crash years back, the thought of the fast down hills on broken up roads made me cautious.

The bike course is beautiful and I was happy to be able to enjoy some of the views. Biking along the ocean was amazing though it did go by in the blink of an eye. Yes, it was on one of the downhills. The huge windmills are beautiful to see as well as the gorgeous trees. The volunteers on the course were abundant and very verbal for the most part. The course was marked out well with signs for the speed bumps, orange markings on all the much larger holes in the roadway and volunteers well placed to alert you to the sharp turns. I loved the last part as it was flat and fast along Marina Blvd past the Golden Gate Bridge. Simply breathtaking.

T2 was a welcome sight and I had made it safely. I wish I could say that for all the bikers. There were a couple of crashes on the course that day. I was smiling from ear to ear as I exited on the run. The run was upon me… the easy part!! No drowning and no crashing!! Woo Hoo!!

Running by the Golden Gate Bridge was something I will never forget. The run course is just as beautiful as the bike. Running along the ocean, the woods, the bridge and conquering the sand ladder…. iconic.

While this was not an A-Race for me and I played the race safe I am glad I did. I enjoyed the views, meeting other athletes and had a great, safe race with no pressure on myself. I loved every moment and would gladly go back again to say hello and goodbye to Alcatraz Island, bike by the Golden Gate Bridge and conquer that sand ladder. Is it then possible to escape from the same place twice? 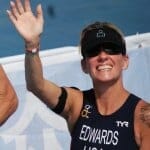 For the past 10 years, I have participated and coached in the sport of triathlon at every distance and have been fortunate enough to represent Team USA in Beijing China.  From Sprint to Ironman, I truly find if you “tri” you will succeed. The races are only part of the success – there is the training along the way, the amazing people you meet, finding your limits and then surpassing them, doing things you never thought you would do, and then doing them all over again.  It is a wonderful community to belong to and I am proud to be a part of this amazing sport.