At the race site

I arrived late at the race site. Even though I slept over a friend’s house close by, I still got a little late start. The website said to be at the site between 5:15 and 5:30. I got there at 5:25 am and had to park far away. I loaded up my TYR transition bag, held a water bottle and pushed my bike to the site. Nearly 100 feet away from my car, I saw my friend Diane. “Hey, I have a wetsuit for Marti,” she said. “Why don’t you take it now.” 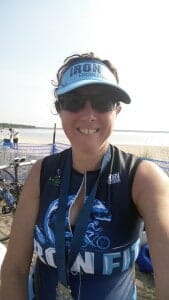 I leaned the bike on the car and ran back to my car with the wetsuit. When I got back to her car, we started to walk. My hands were full of stuff. I could barely move my bike. (I secretly wished we could have dropped off the bike and then parked the car.)

When we got to the transition area, we parted ways. I felt very disorganized. I laid everything out on my tri mat but I felt as though I was missing something. I went through the list in my head but even as I walked over to the bag drop I still felt there was something missing.

After that, I stood on the longest line to use the bathroom, then an even longer line to get body marked. I really wanted to warm up in the water but there was no opportunity. Before I knew it it was time to put on the wetsuits and get down to the water.

As a sidebar, I just have to say that I was so happy putting on my TYR Cat5 Hurricane WetSuit. I have worn it now nearly five times and loving it every time I put it on. It’s so comfortable and there is so much freedom to move your arms.

The beach was so rocky. I could feel the bottom of my feet getting all scraped up. These north shore beaches aren’t like the south shore of Long Island that’s for sure! I found Diane again and we both went into the water together with the rest of the crowd, following the salute to the flag and a moment of silence for Steve Tarpinian, founder of EventPower LI who recently passed away.

The men went into the water. They swam to the first buoy. The women, Athena’s and Clydesdale’s (Athena and Clydesdale are a special category for heavier athletes) got in the water. The men went first. Two minutes later the women took off. I was in the front, which was a mistake. Once we got going, I was kicked, punched and tossed around by the other athletes. And, of course, my nose plugs kept coming off. (Yes, I wear nose plugs. I know… I know… but it’s the only way I could swim!)

Every time I felt them coming off, I had to tread water and put them back on. I think they kept falling off because of all the grease on my body after spraying with Tri Glide to help get my wetsuit on.

I felt much more comfortable in the water, thanks to my coach, Danielle Sullivan of Iron Fit Endurance and my swim coach, Bryan Krut of Open Water Swim LI. If only there weren’t so many people, I would have gotten this done fast. But instead, it took 16 minutes.

On to the bike

T1 (which is back in transition changing out of the wetsuit into the bike shoes and helmet) took forever. I was having trouble getting off the wetsuit. I was full of mud and pebbles. I had to sit on the ground, which made the whole thing worse. I was totally covered in dirt!

Finally after about 5 minutes, I was getting my bike out of transition. I didn’t run it out. I was feeling exhausted just trying to change over my shoes!

I got to the mount area and rode away. I actually felt pretty strong on the bike, which I found interesting. It was a hilly course. I guess you would call it rolling hills. It was actually gorgeous. You drove passed some beautiful homes and wineries, but I was so focused on the road. It felt good to pass a couple of people. (That was a first for me. Usually people are passing me.)

The course was nicely marked. I even mentioned that to a rider who I passed. I felt comfortable on the course, even though it was open to cars. The volunteers were great too. They were very encouraging and steered everyone in the right direction. It definitely felt good to see other riders on the course. (I’ve been in situations where no one else was riding with me.)

The run was hard. I have to admit I went slower than I normally do. I was hot, tired and was having trouble moving forward. I tried to run as much as I could but I have to admit I walked a lot. I was having internal conflicts – if I can’t do this, how can I do NYC next week? I tried to get that thought out of my head, but it was hard to focus. I kept thinking – I’ll walk going uphill and run downhill and on the flats. But there were a lot of uphills!

People watching were great. They were very encouraging along with the volunteers. I didn’t want to walk but then I kept hearing – you’re not winning this so don’t worry about walking… (It’s amazing how much internal crap we hear when we do these races.)

At the end of the race

I was so happy to get to the end. As I was about 25 yards away, a guy from the WildWood Warriers, said in his loudspeaker, “Go Iron Fit Endurance! Danielle Sullivan would be so proud!” He made me laugh.

I made it to the finish line. I didn’t care about my race results and didn’t want to wait around to see how I did. I finished. I had fun doing the race. To me, it didn’t matter, how I did, as long as I had fun doing it. (Sometimes I forget that and I really have to remember because I was never an athlete growing up and just started this nearly a year ago.) 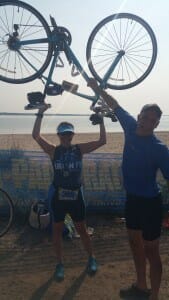 When I was packing up my transition bag, some guys asked me to take a photo. “We want to hold our bikes up,” they told me. I snapped a few shots.

“Why don’t you try doing that too,” one guy said. “I’ll help you get it up there.” He did, but I couldn’t keep it there for long but I smiled to myself. One of the things I love about this sport is the people. They really are some of the nicest people. I loved seeing my friends out there too!

Now that I’m back at home, nearly two hours away from the race site, I’m kicking back and forth, should I do NYC? Should I crap out of it? Does it really matter how I do?

Hmmmm…. I think I’m going to go for it… I’ll do my best and hopefully I’ll finish….

This was a post from 2015. At that time, I was debating on running the NYC marathon.