I realized the other day that Lisa Gordon, Executive Vice President at HJMT Public Relations has been with me to experience all my first swimming experiences. 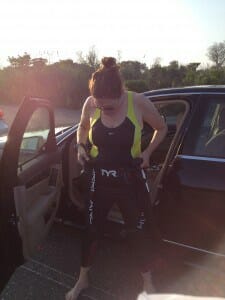 She was with me the first day I went to Open Water Swim LI in Islip. It was the first time I was in a pool since I was a child. When I went in the water I could barely swim 25 yards without throwing up! When the swim instructor told me to do 100 yards I couldn’t do it. I wouldn’t put my head in the water and I was frantically breathing.  I was a mess.

Brian Krut, owner of OWS, was wonderful. He actually got in the water with me and showed me how to breathe. Christine, who works with him, was amazing.  She showed me how to reach out my arms as far as I could while turning my head to breathe.  She also taught me a ton of other technical things about swimming.

I practiced on my own as well. I went to the Long Beach Recreation Center and tried to swim as often as I could. I was determined to get this down!

Lisa comes to Long Island only about once a month, sometimes once every two months. But the next time she came, I had an open water swim in Tobay Beach. It was a practice swim for the Aqua Run event they were having. I had just purchased my wet suit and didn’t really know how to get it on.

The race organizers were getting a little angry that I wasn’t getting it on and everyone else went into the water without me.  I struggled.  Lisa sat in the car and watched.  She even helped me get it on. The two of us struggled. I didn’t know about tri glide or any other product. I just tried to put it on and it wasn’t working!

When I finally got it on, Lisa and I went down to the water.  At that point most of the folks had finished and started their run.  I went in the water toward the boats and lifeguards. I started to swim, but was unsuccessful. The organizers were very patient and even a nice man came toward me and swam with me. I was feeling really down about myself at that point.  How was I ever going to go into the gulf if I can’t do Tobay???

But I was determined and continued to go to OWS in Robert Moses State Park. Bryan was very patient with me and helped me get the confidence I needed.  One time toward the end of the season, the tied was so strong, I decided I was done. As I was leaving the beach he came toward me in his jet ski and said, “you’re not done. You need to end the season strong.  Come on, I’ll stay with you….” That was a very special moment that I will always remember. 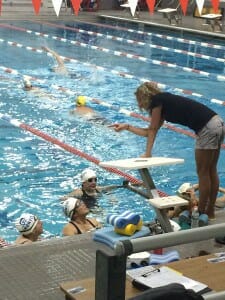 Lisa was also with me when I swam the other day with my new coach, Danielle Sullivan of Iron Fit Endurance, at Suffolk Community College’s Pool. She was so impressed with my progress.

“Hil, I’m so proud of you,” Lisa said, “I can’t believe how long a way you have come.  The last couple of times you could barely swim and now look at you.  You even inspired me. I’m going to get into the pool and start swimming!”

That made me feel so good… 🙂