This granola is a “powerhouse” of ingredients including turmeric, cinnamon ginger and black pepper. The black pepper is for absorption. All of these ingredients are known for their anti-inflammatory and blood sugar balancing functions in the body.

I added the Nature’s Path Golden Turmeric Superfood Granola to my plain Greek yogurt. It really made a difference in the taste. It had crunch and with the coconut sugar it sweetened up the yogurt. It was delicious. I also threw in some fresh fruit for added healthy carbs. Yum!

Like the Golden Turmeric, the Smoothie Bowl includes super greens (spirulina, chlorella, kale and more). It also includes a three berry blend that has extra antioxidants and fiber to support your health.

The berry blend consists of strawberries, blueberries and raspberries.

Like the Golden Turmeric, this also is perfect for yogurt or on its own. It’s a healthy snake and also sweetened with coconut sugar.

The Organic Smoothie Bowl has 140 calories for 1/4 cup serving. 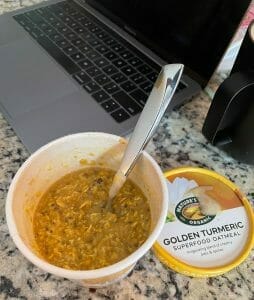 I usually have regular plain oatmeal in the mornings. However, today, I had the Golden Turmeric Superfood Oatmeal and it was delicious.

The on-the-go container is one cup and 200 calories per serving.

When I had it for breakfast, I was pleasantly surprised at how much I enjoyed it. I didn’t taste the turmeric (although there was a slight hint of it). All I tasted were the oats, coconut sugar and cinnamon. It was absolutely yummy good!

Sometimes I review things but I would never buy them again. I would certainly seek this out at a supermarket to buy it again!