I’ve seen the statue of Fred Lebow in Central Park, but didn’t know who he was. I always admired it but didn’t think much about it until I read the book, Forever at the Finish Line – The Quest to Honor New York City Marathon Founder Fred Lebow with a Statue in Central Park by Daniel S. Mitrovich.

The book takes the reader on an interesting journey about how the author became obsessed with Mr. Lebow and eventually made a statue in his honor. It talks about the obstacles he faced in getting the statue to sit in Central Park at the finish line of the NYC Marathon. 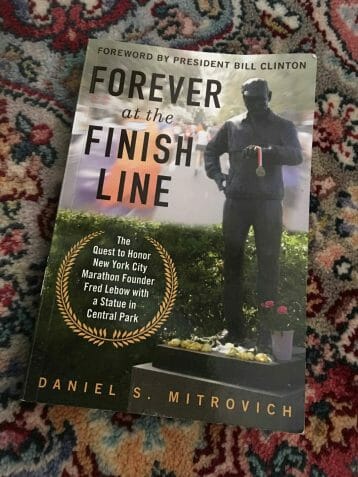 Mr. Mitrovich first met Mr. Lebow after he completed the NYC Marathon in 1990. It was a rough marathon for him. He flew in from the west coast to participate and had been a distance runner since the 80’s. When he eventually crossed the finish line, he saw Fred Lebow there looking at his watch patiently awaiting the runners to congratulate them, he knew Mr. Lebow was a great man.

Forever at the Finish Line explains to the reader that Fred Lebow was the long time president of the NYC Road Runners Club. He was an unassuming man with a great passion for running and encouraging others to accomplish their goals. He took the club from 270 members to 31,000 members.

Sometimes when people meet other people they click immediately and that’s how Daniel Mitrovich felt about Fred Lebow. Before he thought of creating a statue, he wanted Mr. Lebow to meet President George Bush. Interestingly, he was able to get a meeting with him through his brother.

The reader saw first hand the process of all the obstacles and challenges in making and then having a statue placed in the park.

What struck me about the book was Daniel Mitrovich’s love and admiration of Fred Lebow. The most compelling part of the book, in addition to actually having the unveiling ceremony, was the last chapter where the author talks about the Boston bomb that took more than 200 people’s lives and how someone in New York, put a Boston marathon jacket on Fred’s statue, two signs – “I run for Boston” and a flower in Fred’s hand.  “She knew how sad Fred would have been about this horrible event and she was right. Had Fred been alive, he would have been in Boston and may well have been near the finish line.”

Forever at the Finish Line has some great photos throughout and this true story is quiet compelling. Thanks Daniel Mitrovich for sharing your story with the world!