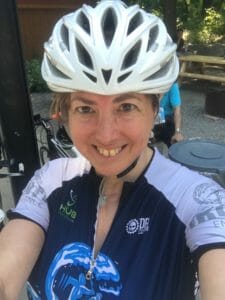 When I signed up for the Hudson Valley ride, I didn’t realize what I was getting myself into. I knew that all my teammates didn’t want to do it for some reason or another but I couldn’t understand why. After taking this little ride, I understand why!

I rode it with my husband. I finally convinced him to do something with me. I really wanted to do it but didn’t want to do it alone. (I do everything alone!) So he said yes. We made a weekend out of it. Came up Friday evening and spent the day sightseeing on Saturday, going to the Culinary Institute of America (CIA) for lunch and then having a nice dinner in a local pub in Fishkill. It was relaxing. I needed some downtime after running 9 miles the day before.

I tossed and turned all night. I was having nightmare after nightmare. That morning, I said to my husband, “you know if you don’t want to do this, I’m okay with it.”

“You dragged me all the way up here? We’re doing it,” he said.

We put on our gear and we were out the door. I pumped up my Felt tri bike and he pumped up his Felt road bike. We decided to cut out some of the uphill sections of the course so we parked by the bridge. (It was about a mile away.)

We put on our helmets. I have a Louis Garneau helmet and he has a Giro helmet. I put on my Pearl Izumi cycling shoes, which I totally love. They are bright pink and carbon fiber. 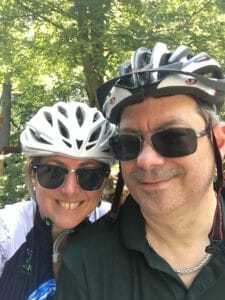 And we were off. We joined the other riders and followed the signs that said 15/33. We were only doing 15 because my husband really hasn’t ridden in a long time. He has a bad knee and it was nice enough that he came with me, let alone that I force him to do 33!

The bridge wasn’t scary. I thought it would be. It went on for a mile and a half. It was slow going. We could only go 10 mph, and believe me, there were people going slower. It was lovely going over the Hudson river.

After we left the bridge, we were dumped into a rail trail and followed that for another mile or so until we got to the street. That’s where the fun started. It was hilly. Not a little hilly, a lot hilly! And some of the hills were steep!

We went another mile or so climbing up hill when we got to a fork in the road. Brian said, “let’s take a short cut.” I followed. (I’m totally directionally challenged so if he says go this way, I’m following him!)

The short cut turned out to be all up hill. There were some steep climbs. It just kept going up and up and up. At one point I turned into someone’s driveway and told Brian to stop. “Let’s look at the map while I catch my breath,” I said.

We were off the map. How could that be?

I looked at Brian. He looked at me. We got back on our bikes and went for a mile or so down the hill. When we got to the fork in the road we followed the 15/33 mile signs. There was very little to go at that point because that was the actual turnaround. I couldn’t believe we went so far out of our way!

We followed the rail trail back to the bridge and in the process I rode over a dead mouse, which gave me flash backs to a time long long ago, when I lived on St. Marks Place in NYC and woke up at 3 am and stepped on a mouse. I’ll never forget that nightmare!

I let out a scream!

I kept on going. The road was bumpy. It was just as bad as Heckscher Park on Long Island! I was getting nauseous!

We stopped right before we got to the bridge. Everyone was stopping. It was like a party! People were buying ices, going to the bathroom or buying goodies offered by the park. We sat for a free minutes and then got back on the bike and took off slowly across the long bridge. 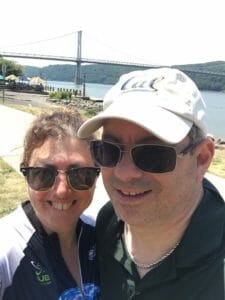 As I passed a couple of people on the bridge, I looked out and saw beautiful mountains covered in trees and I smiled. I’m glad I did the ride!