I typically train alone. It just works out that way. I look at my training peaks schedule and do what I need to do. I always try to fit it in sometimes during the day.

Well, today, I decided to go out to West Neck Beach and train with the All Women’s/Men’s Tri Team. It was a drive out there. West Neck Beach is located in Lloyd Harbor and all the way on Long Island’s north shore. We swam in the Long Island Sound, with sightings of Connecticut.

Getting on the wetsuit is always a challenge, especially the long sleeve one. (I heard the water was cold and didn’t want to chance wearing my no sleeve wetsuit.) 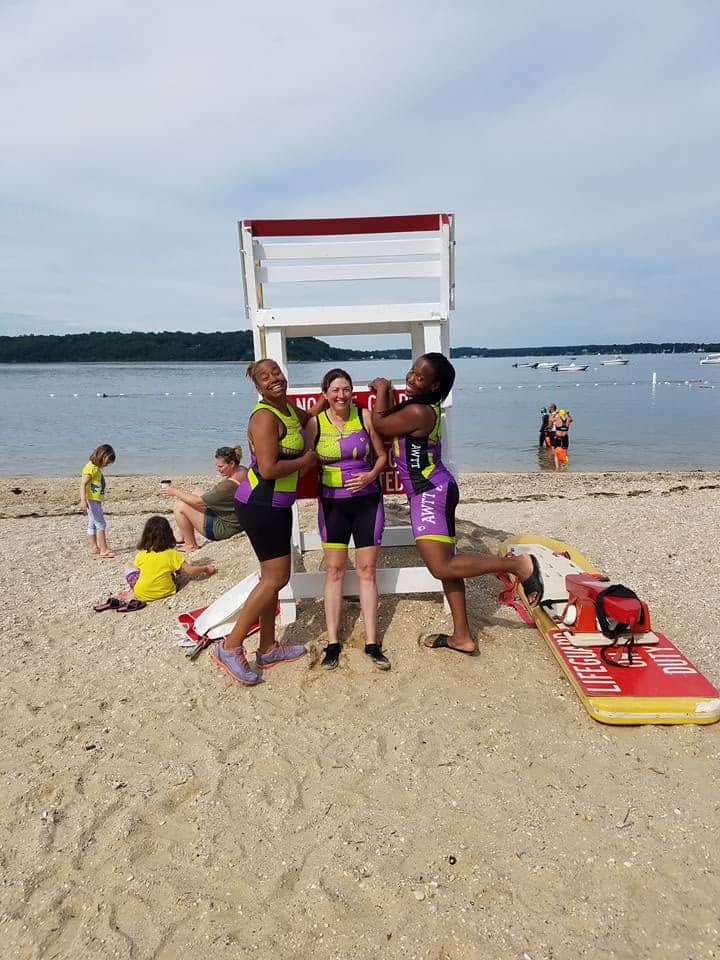 The swim was incredible. Once I got used to the water, it was like swimming in a lake!  There was a slight current heading back, but it was beautiful.

There’s nothing like swimming in the open water. There’s a sense of freedom with no restrictions that you can’t find anywhere else. That’s how I felt swimming in the Long Island Sound. I just felt happiness!

When the rest of the tri group came back to shore, Lisa Laws and Megan White, our co-captains of the team, gave everyone a recap of the swim and congratulated everyone for their efforts. (They are both very special people and very motivating!)

After the photos (where a man took our photo and said, “let me jump in. My wife wants to know what I do every Sunday morning!), many of us decided to go for a run. There’s a short path by the beach that spans a mile in each direction. It’s not well-maintained and has lots of cracks so if you’re out there, be careful!

I ran with my teammate, Shirley. She’s a runner. She has run many, many half marathons and was heading up to Rhode Island to do another. She had mentioned to me that she does the Galloway Method. We had talked prior to this run about it. She discussed with me that she has PR’d many runs using the method. I was intrigued and decided to recruit Jeff Galloway to be my running coach for the NYC Marathon. (But that’s for another blog post…)

Anyway, she likes the 90/30. Since I’ve been doing shorter intervals, I decided to try it out for a 5K. We ran at a comfortable pace and took our walk breaks. We both felt good. I’ve  been wanting to get in a run with her so I was excited that I had the opportunity!

Along the path, we passed many of our teammates. It was awesome seeing them out there!

After the run, I got into my car and headed home. I just had a big smile on my face. This was the first time in a long time that I felt really good about my training.  Thanks AWTT/AMTT!