When Dawn approached Team Galloway Long Island with the notion that we all do the Lifetime Tri in Garden City, many of us were excited! Janeth, Rebecca and Merril also signed up and I knew it would be a great training day so I signed up too. Unfortunately, Dawn was unable to compete and tried to give her entry to Colleen, but Lifetime was strict about no transfers, which was a bit of a bummer.

For some reason leading up to the tri, I kept having anxiety dreams about not being able to compete because I couldn’t get my locker open or something else happened which inhibited me from performing. I tried to push away the anxiety and just have a good time. 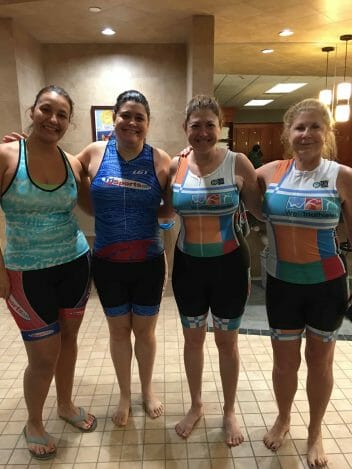 The morning was uneventful, except at one point I thought I left my goggles home and had a tiny meltdown. Otherwise, it was uneventful.

The four of us were in wave 1 (the expert wave). At 7 am, we were at the pool ready to get started.

Jamal, the head coordinator, did the countdown and told us to take off. I shared a lane with Rebecca. I swam slow at first, trying to pick it up as it got underway. I’m not quite sure if I was able to do that, but that was my goal. I swam and swam and swam. It felt amazing. I tried to clear my head and just focus on a long stroke in the heated pool. At one point, I looked at the clock. I had 1.5 minutes left. And at that point, I picked it up. Then, we were told to stop. I swam to the end of the pool. The rest of the crew were done and at the locker room.

I went to the lockers to get my spin shoes and sneakers. I couldn’t open the locker. I told Jamal and he called for someone to help. Fortunately, by that time the person got there, I was able to figure it out and opened it. There was a bit of high anxiety when I started to have a flash back to my dream.

The five of us (Janeth brought her friend along to compete) went upstairs to the cycling studio. We had 10 minutes to make it upstairs. 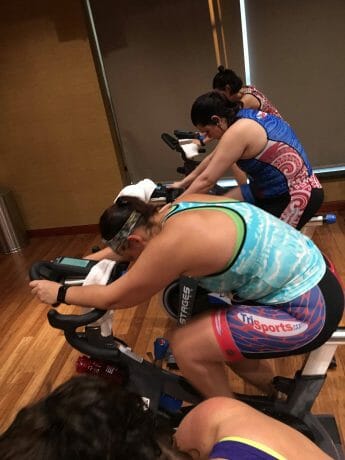 We all jumped on a bike. Mine was too high and I didn’t start the bike so it wasn’t registering. Almost 3 minutes went by and I didn’t have any time on my clock. Jamal said, “I told you to push the start bottom twice. Okay, I’ll give you a half mile extra.”

Janeth’s friend also had an issue and he gave her a half mile too.

We rode for 30 minutes that felt like an hour. I tried to keep my watts at the average wattage that I use for my bike and rode. The seat was uncomfortable, even with the chamois. I tried to stand every so often but then my speed and wattage dropped. So, I sat back down.

We stopped. The Lifetime folks registered our time and we went up to the treadmills.

The treadmills were the ones that look like you’re running on a boardwalk. They were nice and smooth. Janeth and I were next to each other. It was great because she was helping me (without even knowing it) go further. I started out going slow and then as I started to feel comfortable, I picked it up. The last two minutes I tried to really pick it up and then, the 20 minutes was over.

We were finished. It was a little bit anti-climactic because there was no medal or anything, but we took a photo. We were all exhausted. And, the thought I had was, how am I going to do an Olympic in April when this exhausted me? (haha… I always think that…) 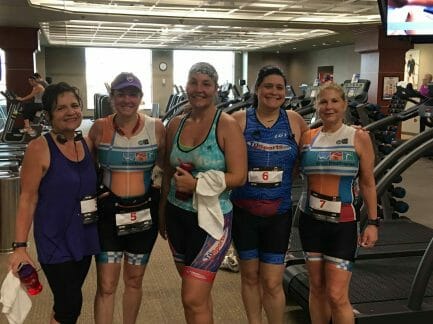