I didn’t know what to expect. The cost of the tri camp was $395 and included coaching, food, and lodging for the weekend.  I had looked into other tri camps and the rates were in excess of $1500.  What could I possibly get from something that is a quarter of the price?  Will I not eat all weekend? Will the training be bogus?

Well, obviously, I was dead wrong! 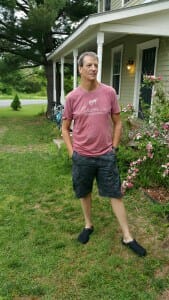 Open Sky Training is situated in the home of Ed and Stephanie Gabriels.  They own a beautiful home in Germantown, New York.  The house is gorgeous.  There are several bedrooms that are nicely decorated, a large living room and den.  Since Ed is a stylist for a living, he prepared the meals and made them taste and look amazing!

From Friday night to Sunday afternoon, the nine women from the All Women’s Tri Team received hearty meals that were both nutritious, healthy and appetizing!

Marti DiPaola, my running partner and I left Long Island at 4 pm and arrived at the camp at 7ish. As soon as we walked in, we were greeted by teammates, Jamie, Dereka and Diahann.  Ed was there and told us that I was rooming with Diahann and Marti would be rooming with Jamie. John Stewart was there too.  John is a triathlete, English Channel Swimmer and coach.  He told us to put on our running gear and that we were going for a run. 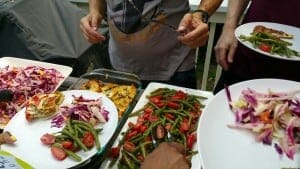 After a series of active warm ups, we ran for about 3 miles and then headed back to the house for a dinner of pasta and meat sauce. It was delicious!

The next day started early. We went for a 2+ hour bike ride through rolling hills and a few steep hills.  John taught us how to ride the hills and how to shift, when to shift and more! He was incredibly patient and understanding.  After the ride, we went into the backyard and practiced mounting on the bike. After several of us fell, we started to get the hang of it… I know for me, I need a lot of practice! 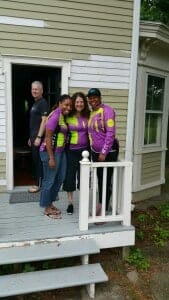 We had a quick snack of some yummy peanut butter and bananas on a wrap, got into our bathing suits and went for a swim at the pool at Bard College. John videotaped us and gave us individualized attention to make our swim stronger.  He also taught us how to sight in open water, how to swim straight by closing our eyes while we were swimming and he critiqued our strokes. It was really helpful.

We went back to the house, had lunch and rested for two hours.  It was wonderful.  Diahann and I just passed out on our beds. (I’m sure everyone else did as well…) After our nap, we gathered our wetsuits and went to the lake for an open water swim.

The water was cold but not that cold. We all went in. John told us just to hang out and relax in the water before we got started.  Ed joined us.  Ed is also a triathlete and coach.  I was a little nervous that I would have a panic attack. At first I found it difficult to put my face in the water. I’m not really sure why. But I forced myself. I took a couple of strokes but couldn’t go that far. John told us to take 20 strokes and stop.  He gave us a point to focus on for our sighting. I started to coach myself, I don’t have problems in the pool, I shouldn’t have problems here… I got this.  We swam some more.  Now we were in the middle of the lake. Some of my teammates were having panic attacks and I stayed with them.  “You got this,” I told them.  By helping them, it took the focus off me and I was able to do it without any problems.

John split us into two groups. One group headed back and the other group went in a triangle around the lake. I went with that group. At first, I fell behind. Then, my wetsuit opened. I could feel a cold stream of water go around my body. It actually felt good. I called for Lisa to help me. She stopped, zipped me up and we were on our way to the rest of the group.

Taking off the wetsuit

When we finally made it back to the shore line, I told John and Ed that I had to take the wetsuit off. I find it so restricting. I wanted to swim in the water without it.  And, boy, I had absolutely no problem. I felt free. I could swim like that forever!  I headed over to a floating dock in the middle of the lake. Ed followed me and so did John.  Ed climbed up and sat down. I followed him and John followed me.

“You know I’ve been up here a long time and never went on this dock before,” Ed told me.

Ed and John were joking around and I felt as if I were 15 again with my high school friends just being silly.  We jumped off the dock, well, they jumped, I edged my way in and we swam to shore to meet up with the rest of the team. 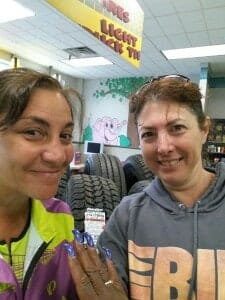 When we got back to my car, John saw a big bubble on my tire. I pulled into a gas station and the attendants told me that I shouldn’t drive on it.  So, I called triple A but no one picked up. Then I called M-Brace (the service for Mercedes).  They sent over a tow truck that evening and the guy changed my tire to the donut. He told me I shouldn’t drive on the donut back to Long Island. He also told me I owed him $150 because the credit card that he got from Mercedes didn’t go through.  I gave him my Triple A card but he told me he didn’t use it because Mercedes finally sent over.  He was hanging around the house for a very long time, way after everyone went upstairs so it got me a little nervous.  Thankfully, Diahann stayed with me! 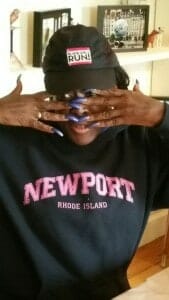 The next day, I went down for breakfast and started to call around. I called M-Brace and spoke with their concierge, who wasn’t at all helpful. I called various tire companies.  No one was open.  Diahann showed me what type of tire would be comparable with the Mercedes tire.

My teammates went out on a brick in the morning.  Several did between 8 – 15 miles on the bike then a 1 – 2 mile run and then back on the bike, followed by a run.  Most did this three times.  Marti stayed with me.  Since Star wasn’t going out, we encouraged her to join us.  The three of us set out to find the Mavis in Hudson.  I went slow on the donut through the windy, hilly roads.

When we got to Mavis, the manager told me I needed four new tires. Then he said two.  Then he ended up selling me one tire. While at Mavis, we took lots of photos and I learned that Star only likes to have her nails photographed — that’s her signature.  She said she doesn’t like to have photos taken of her. (I’m not sure why, because she happens to be a beautiful woman but I loved the idea of the signature!)

Back at the indoor pool

As we got back to the house, our teammates were wrapping up and John said, it’s pool time.  Only Marti, Diahann and I went to the pool at Bard College.  That’s when all the fun began.  Just as I thought I knew how to swim, John changed everything — the stroke, the way we breath and the positioning of our bodies.  Now I was really confused but understood that he was spot on with this and that if I could master it, I would go faster.

Was it worth it? 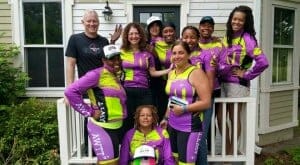 The tri camp ended with a delicious BBQ, a little wine and hugs from everyone.  Not only did I learn something from the weekend but I also bonded with the most incredible group of women I have ever met – Diahann, Star, Allison, Shidah, Lisa, Gail, Dereka and of course, Marti D. I’m so glad I had the opportunity to bond with these women and look forward to many more amazing experiences together!

Was it worth going to tri camp?  If you asked me, I would say without a doubt!