SheFit is a new sports bra company that has been doing some aggressive marketing. I kept seeing their ads. Once I went to the website, I would see it even more often.

So for $65, I decided to buy it. I typically wear no-padded Under Armour bras. The ones I have are at least five years old. I just can’t seem to find bras I like!

For us bigger chested women, finding a sports bra is a major issue. 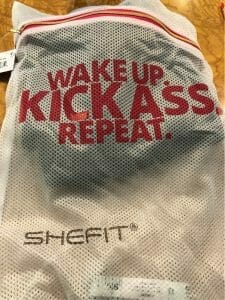 The bra arrived in a nice garment bag. I unzipped the bag and found the bra inside. After reviewing the YouTube video, I tried it on.

My biggest challenge was the front zipper. I tried to zipper and it wouldn’t work. Then I reviewed a YouTube video where the rep said, “if you are having issues zippering, hook the eye hook in the front, then try zippering.”

After that, I adjusted the back by pulling it into place and the shoulder straps also, with a little tug it was set.

It felt generally comfortable. I jumped. They stayed in place. Now for the real test. 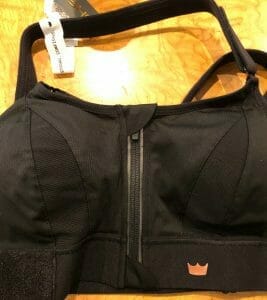 I decided to test it out under my tri kit. On the day I used it, I was going to do a swim and a bike. I thought it would be perfect since the bra says it is made for the water and should control bounce on the bike.

I put it on and pulled the back tight, then pulled the shoulders tight. I noticed that there was some slack on the bottom. I’m not sure if the bra was too big?

In any event, I wore it under my kit and then put on a wetsuit. I didn’t seem to notice it under the wetsuit, although I did feel that it was a little bulkier than my normal UA bras that I’ve been wearing forever. The straps on the top and in the back make it a little cumbersome. I wished it were not so thick.

But, while I was swimming, I didn’t notice anything different. Unfortunately, I didn’t get to ride or to run that day, but I did try it on another day and “the girls” seemed to stay in place. If the straps weren’t so think, I may want to buy another one of these bras. I guess if you are only using it for running or cycling, you probably won’t notice the straps. Also, the bra comes in different support strengths. The one I bought was maximum support.

SheFit can be purchased online at https://shefit.com/.