A few weeks ago, I tore my meniscus. I had just completed a 48-mile bike ride and was going to run off the bike. My bike seat was not the right height. I had it lower than it should have been and while I was riding, I could feel my knee twinging a bit. When I went for a run off my bike, I felt my knee buckle.

This isn’t the first time I tore my right meniscus. The first time was during a skiing accident. I was going down a blue relatively fast and hit something and fell the wrong way.  I heard it snap.

So, when this happened, I recognized the feeling. I spoke with my coach and told her I thought it was my meniscus. She thought it would be good to go for ART. I went to my chiropractor and he told me it was just a sprain.

In my heart, I knew it was more. After it wasn’t getting any better, I called my orthopedic doctor at Hospital for Special Surgery. She took me right in and after the insurance company approved the MRI, she walked in the room and said, “boy, you tolerate pain well.”

After that, she said I needed surgery.

I had surgery on this knee before, nearly 12 years or so ago. At that point, it took me months to get better. The surgeon did a repair, for which I was grateful. But it did take a long time to heal.

The night before surgery, I stayed overnight at my daughter’s apartment. The next morning, on October 18, I walked to 65 street on the east side. When I got there, I was greeted by a security guard who took my temperature and sent me on my way to registration on the 2nd floor.

I didn’t have a long wait. Within a few minutes, I was taken in the back. A nurse prepped me and I waited for the surgeon. When she got there, we talked about what she was going to do. She really didn’t know which direction to take until she opened up my knee and saw what was going on. “We will either repair or extract,” she said.

I continued to wait. It felt like I waited hours but it wasn’t long before someone else came in. Thankfully, the night before I took a Xanax. I was feeling relaxed, yet anxious.

When the Anesthesiologist Walked in

The Anesthesiologist walked in and told me his name was Dr. Lee. I explained to him that I hate not being in control. He understood and told me it would be okay. He said he was going to give me something to relax me and then once I was relaxed, he would give me an epidural.

Soon thereafter, I was rolled into the operating room. It was cold. The nurse gave me some warm blankets. The anesthesiologist gave me something through my IV and I was out. 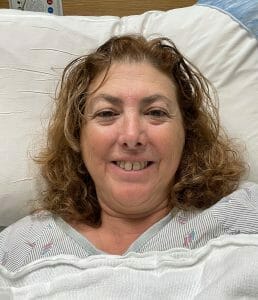 When I woke up

I woke up in recovery. I felt as if someone took a hammer and banged it hard onto my knee. The nurse gave me Dilantin, oxycodone, and Tylenol. I was out of it, but the pain was severe. It wasn’t going away.

I think I was there a lot longer than anticipated. The nurse finally called the anesthesiologist to come back. He gave me a nerve block and said it would last for 24 hours. (It lasted longer.)

The nurse gave me crutches and I was on my way. (I had no idea how to use them!)

What did they do?

The surgeon called my husband and told him that they removed a piece of my meniscus because it was in the white zone. Apparently, that means that there was no blood supply going to that area. She also injected my knee with my own stem cells which were taken from the bone marrow in my hip.

I still didn’t feel the intense pain in my knee. It was stiff. When I started to feel some pain, I took the oxycodone. I also rented a unit from Game Ready, which was an ice pack and compression sleeve, similar to the Nomatec but with ice. I kept using the unit.

But my leg and knee felt numb. I had no sensation in my leg. With some of the pain meds, I really felt okay. I was optimistic that I would get back to triathlon training within a couple of weeks.

When the numbness wore off…

Then the nerve block wore off and the pain set in. It was two days after surgery and I had a limited supply of pain meds. I continued to use Game Ready, tried to meditate to not think of the pain, and tried to focus on my goals for 2022.

Now, a week later, I’m starting to go to Physical Therapy and looking forward to getting back to my morning activities. I guess let’s see how it all transpires. I’ll keep you posted!

P.S. This time, with all the training I did prior to surgery and having a surgeon who specializes in women’s knees,  I think it will be a lot faster than the first time. As a matter of fact, when I spoke with the PA yesterday, she told me I could be swimming within two weeks!