Last year, my open water season ended during the first week in November. At that time, the water was getting just too cold, even with a thermal wetsuit, booties, a hoodie, and gloves.

This year, it was cut short because of the need for meniscus surgery. I swam until October 17, the day before surgery.

Here are three incredible swims the week before surgery:

I swam the first of three with my friend Paul. We met many years before at a Total Master Swim session. At that time, we swam in the same lane. Paul had been asking me for a while to come up to the North Shore for a swim, but as you know, life gets in the way and I was unable to until that day.

The water was choppy, very choppy and at times I was a little nervous. But, we had no problems.

We had an amazing swim from Port Washington to Sands Point and back. I enjoyed looking at the homes on the water. I also loved that we swam parallel to the beach. We were out about 500 yards or so off the shore.

The water temperature was warm. The air was chilly.

We had a wonderful swim. I was grateful that Paul invited me to join him. It was particularly fun swimming in a “new” place for me.

Tobay Beach on the Bay Side

My swim partner, Ray, and I went out to Tobay Beach on the Bayside and did a short 1500 yard swim. We swam from the Marina to the Bonzai tree and back to the beach. It was easy, fast and the water conditions were perfect. It had a pull as it always does. Going in one direction you could go either super fast or super slow. But it didn’t matter. It just felt amazing to be out there!

Especially, watching the sunrise above the marina. It was breathtaking. I love swimming there and watching as the sun makes the water sparkle.

During the season, we swim there a lot. But “watching the sunrise never gets old,” Ray always says.

Tobay Beach on the Ocean Side 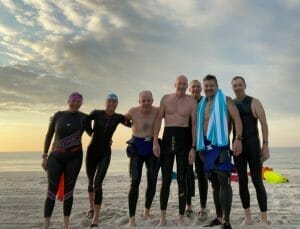 One of the best swims that week (and that season) was going out with Danielle and the Iron Fit Endurance team and swimming the Atlantic Ocean. What’s interesting about swimming in the ocean at Tobay is, there are no breakers. It’s just one big body of water and a lot of sand.

On that Thursday, October 14, the water temperature was around 68 degrees Fahrenheit and the sun was rising from the east. As we were swimming we can see the sun rising. At first, it was just a sliver of sun and as time went by, it got higher and higher in the water, until it reached the sky. As the sun hit the water, it radiated all different colors. It was magnificent.