Should I run the Miami half marathon?

I asked myself that question several times. And my answer was always, “why not?”

Going to Florida to see dad

I was going down to Florida to visit my dad the weekend of the January 29, so I figured, while I was there, I might as well see if there were any races going on. I saw online that it was the Miami Marathon weekend and there was also a half marathon. Since I wasn’t able to do the 10miler at the Blue Point Brewery, I thought this would be perfect. I knew I was in shape for it. I just completed the NYC Marathon and continued to run in preparation for the Brewery, so the timing was perfect. 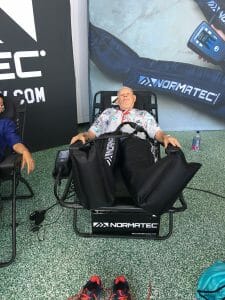 When I went down to Florida, I met my dad and we both went to the Miami Expo to pick up my number and check out the vendors. It was a huge expo — just as big as NYC!

The next evening, I headed down to Miami. I checked into the Intercontinental Hotel. It was the perfect location for the race — not too far to the start line and very close to the finish line!

The hotel was gorgeous. They had two restaurants — one was the top restaurant in Miami, Toro Toro, a Latin Steakhouse, and the other, a sandwich/burger place. I went to Toro Toro after checking in for a light dinner and then went upstairs to my room on the 13th floor with the most magnificent view! 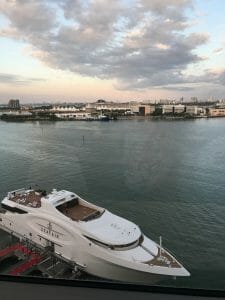 The next morning, I work up at 4:30, put on my clothes and walked to the start line. (I had heard it may rain so I went with Dad the day before to get a raincoat and hat from Dick’s Sporting Good Store.)

The organizers wanted us to get to the start line by 5 am for a 6 am start. 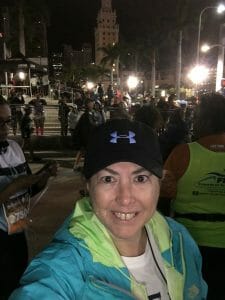 I stood on line and as usual, met some amazing people. All 50 states were represented at this Marathon/half marathon and dozens of countries. I met a woman from Miami Beach who told me about her running group and all of her marathon experiences, and I also met a woman from Ft. Lauderdale, running her first half.

As we stood there, 6 am came and went. The people with disabilities went first, then each coral was grouped in five-minute intervals. By the time letter J was off, it was nearly 7 am. By that time, it was raining hard and freezing. The rain didn’t let up and thankfully, there were runners giving out garbage bags.

The rain was pouring down from the sky and as we approached the start line. I thought, “my hotel is only four minutes away. I can scoot out now and sneak back into bed. Should I run the Miami Half Marathon?”

I struggled with myself and I saw others struggling too. But we were slammed into the start line like sardines and there really wasn’t a way out.

We must have all looked so funny with the garbage bags running!  At some point, I couldn’t stand mine any longer and discarded it. Even though I had bought a jacket, I was soaked!

As we ran, the rain let up a little and for most of the run, it drizzled. We ran over several bridges and saw the cruise ships lined up with people outside cheering us on. We ran through these gorgeous neighborhoods of Miami, Miami Beach and South Beach. During most of the run, you saw water.

At mile 1, I had to go to the bathroom. I stood on line for five minutes to use the porta potties and then decided to keep moving forward. At mile 3, I saw the line was so long but then I saw bushes. Okay, Okay, when you gotta go, you gotta go! (And anyway, if the men could do it, I can do it too!)

There were a ton of people throwing up on the course. I never saw that before. I felt so bad, I stopped a couple of times to see if they were alright or needed help.

What I loved about this race 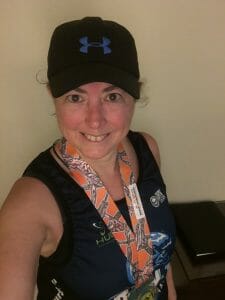 We ran over bridges, ran passed luscious parks and ran around tall buildings. And, although it rained, it was probably the nicest half marathon I had ever done. It was well-organized, there was music at practically every mile, and the crowds were amazing. At mile 8, there was a Latino man giving out American flags and Mexican flags. It was awesome. He handed me one. I ran for a block or so and then gave it to one of the people cheering on the street.

What I loved most about this race was that there was every nationality represented — Hispanic, Jewish, African-American, etc. We ran as one people. It gave me hope for the future. 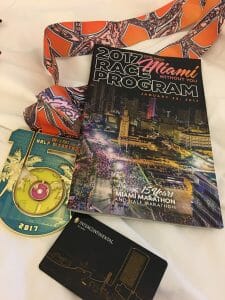