I stayed by Simpson Bay in Saint Maarten on the Dutch side. The roads there were all broken up and there were no sidewalks. In addition to that, there were puddles galore.

I had an 8 mile run on my Training Peaks schedule so I tried to figure out a four mile out and four mile back route but even after looking at Strava, Map My Run and some other apps, I couldn’t quite figure it out. I decided to just go and wherever I ended up, I ended up. I was feeling somewhat adventurous.

I woke up at 6 am and was out of the hotel by 7 am. I ran out of the hotel and made a right into town. With no sidewalks and lots of puddles (it keeps raining in the evenings), I ran through town and veered toward the bridge that takes you from the Dutch side to the French Side of Saint Maarten. As I got to the bridge, the sky got dark and it started to pour. I decided to run in the opposite direction, toward the airport. As I looked in that direction, I noticed a beautiful rainbow in the sky. 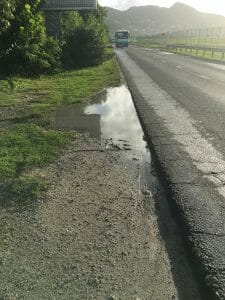 For that brief moment as I entered the roundabout, there was a sidewalk, a brick sidewalk. I ran on that until there was no longer anything, just a dirt road with lots of puddles. I kept running towards the airport. I thought it would be cool to circle the airport. But as I got closer to the airport, the dirt road ended and there was no side area to run. If I wanted to go to the airport it was the street for me. Since the cars were flying by at around 40 mph, I opted to turn around and head toward the bridge. The rain looked like it passed.

When I crossed the bridge, which by the way was .4 miles long, I saw a shipwreck. I shot this photo: 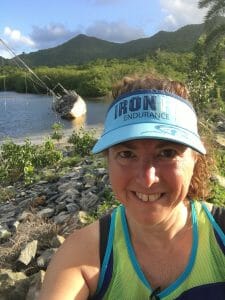 After the bridge, I headed toward the town of Margot. I saw the Princess Casino and decided to take a detour. It had a road! The thought of running on a road was so appealing to me at that very moment that I headed in. I got to a guard gate. I stopped and a friendly local let me cross. I went through the gates and ran in a big circle around the casino. The rain came back. As I was running, it started to downpour. “Good thing I put on the BlisterZone on my feet,” I thought. “Now I can see if it really does work.”

My feet were drenched, my body was drenched. I ran out of the Casino area and back onto the grass and from the grass a dirt road with huge holes. “Don’t fall in,” I kept thinking to myself.

I got to the bridge and crossed it again. This time I saw three hearts with locks of love. Lovers locked a lock on the hearts. I took this photo: 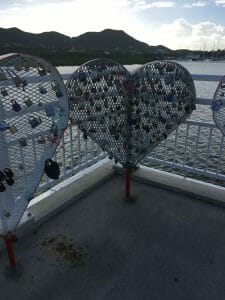 When I got to the end of the bridge, I had 5.25 miles on my watch. I was supposed to do 8. I can run another .75 back to the hotel or I could go on the treadmill or I could try to go back to the airport but that road was horrible. Hmmm….what should I do? I decided to skip the 8 and leave it at 6. There’s always another day!

Although the course was very challenging because of the weather and road conditions, I think it was one of my favorite runs to date.