It was a cold, dreary day. The dark clouds suggested that it may rain any moment. I was prepared. Earlier in the week I went to a few of the stores in Roosevelt Field Shopping Center (located in Nassau County on Long Island, NY) and was scrambling to find a waterproof jacket. I finally found one in Dick’s in the men’s department and I bought it.

I wore my long sleeve Pearl Izumi running shirt over a tank top and put the Ralph Lauren Sport jacket on before I went out. I was prepared on my route. My son, Derek, helped me figure it out.

I put on my Marathoner Camelback hydration system and was out the door by 8 am. My running coach, Jeff Galloway, suggested that I do an easy run of 10/50 (run/walk ratio). I was going to stick with that ratio until I was at mile 11 and then I was going to do 10/40 and then 5 miles out 10/30.

Everything was going as planned. I ran from Lido Beach West to the Long Beach boardwalk and through the West End into Atlantic Beach.

As I was running, I started to get emotional. i started to think about the people in my life and how grateful I am!

I thought about my mother and how she had so much trouble walking her entire life and here, I was running 23 miles. She must be proud or thinking I am out of my mind!

I ran back through the West End of Long Beach without a hitch. They held the Irish Day Festival and I thought I may get caught up but all I bumped into were teens on their bikes riding with six packs of beer. 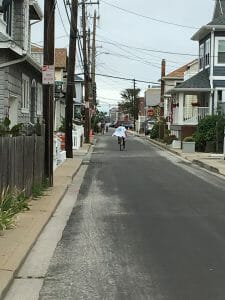 I ran toward Atlantic Beach. I was never really over that way before. Who goes to Atlantic Beach if you live in Long Beach? The only time I drive through there is to go to the airport over the Atlantic Beach Bridge. But this time, I ran to the bridge.

Then I did something I have never done. I ran on the Atlantic Beach boardwalk. I didn’t even know there was a boardwalk there!

I ran back through the west end and saw more kids with beer.  One kid almost ran me over… that was pretty scary!

When I got back on the boardwalk, I got to the end and then turned around. i needed four more miles in order to get this right. As I was running along, my battery light went on. I immediately texted my coach, “what should I do?”

She said, “you’ll just have to run without it…” but she helped me troubleshoot the situation. That put a damper on my run. I love seeing the mileage when I finish. It stopped at 14 miles. 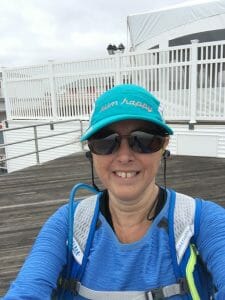 I put on Rungo and Map My Run. I figured one of them would be accurate. I gathered up another 3.5 miles back to my house. There I was going to fill out the water bottles but instead, I was hurting. I took off my sneakers and socks and replaced them with new ones. I realized the Ralph Lauren Sports jacket I bought was wrong for running. It didn’t breath! I took off my Pearl Izumi tights and put on shorts. I was sweating. I was wearing way too much clothes. Then I thought should I finish the five miles outside or inside. I do have a treadmill.

I felt disappointed that I didn’t complete what my running coach told me to do but I was also glad I was able to get most of it done!