Sometimes It More About the Experience Than The Actual Race…

Races aren’t just about the race itself, but about the whole experience leading up to and after the actual race.

After running the NYRR Mini 6 miler a few months ago, my daughter and I decided she was ready for a 10 miler, so we signed up for the NYRR Bronx 10 Miler Race. Since I live on Long Island, I booked a room at the Day’s Inn Yankee Stadium.

“How bad could that be?” I thought.

I had just come back from Bermuda on Friday, with the possible threat of staying there the weekend because of a hurricane that was supposed to hit the island. On Saturday afternoon, I ventured into the city.

The traffic was horrible (as usual) and a short ride that should have taken me an hour took two. As I was on the Grand Central Parkway, I get an alert in my car. It said that I had a couple of low level tires and to get adjusted immediately.

I started to panic. Is someone telling me not to do this race?

I went to the gas station on the Grand Central Parkway by LaGuardia Airport and asked the attendant for help. He was gracious and filled all my tires. I was off again.

Now I was really late for dinner. My daughter, Zoey, had made a reservation at a nice Italian restaurant by her apartment. I called her and let her know I was running late, very late!

When I finally got in, we had a nice pasta dinner, went to her apartment, picked up her things and headed into the Bronx.

The warning lights came back on and I knew there was nowhere to stop at this point, so I kept on going. We arrived at the Day’s Inn at Yankee Stadium and looked at each other.

We parked the car and walked inside to find a woman behind a bullet proof wall. She gave us a room key and we walked into the hotel room to find that we weren’t alone! 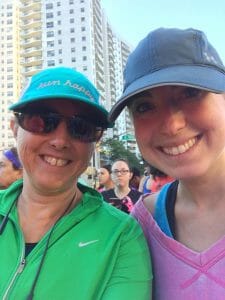 There was a gigantic cockroach walking on the wall. Not only that, the fire alarm was going off like crazy! When my daughter complained, the woman behind the bullet proof wall, came out and walked us down the hall.

The room she put us in was just as bad. It had a perfume scent that tried to cover up the cigarette smoked room. As I walked in, it didn’t take more than two minutes and I was in the bathroom throwing up.

“Maybe we should leave,” my daughter said as I got out of the bathroom.

She proceeded to check the mattress and bedding for bedbugs. She didn’t find any. I turned up the air and we hesitantly got under the covers to go to bed.

That night, we both tossed and turned. The AC was up so high, we both shivered.

I smiled. What was I going to tell her that I don’t sleep?

We dressed and took an Uber to the race. 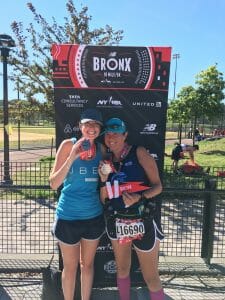 The actual race was uneventful. My daughter was so nervous about this one and I knew she would do great. I was a little nervous too. (I think everyone gets nervous before these things.)

We took off and I started out slowly with Zoey for the first quarter mile and then went into my coach’s recommendation of 15/15 run/walk and then after mile 3, 30/15. Zoey continued to run and ran the entire 10 miles. (Impressive!)

The race started on the Grand Concourse and went to the Botanical Gardens and back. It was hilly! (A few people told us the course was flat. Ha!)  Zoey screamed out to me at mile 5 when we were in the park. She was heading in one direction and I was in the other. It made me smile. I was so proud of her and her accomplishments!

Zoey’s boyfriend, Daniel, met us at mile 6 which was a Godsend! He had replacement water bottles for both of us. This enabled us to keep going and not stop through the water stops. (The only downside was that the water belt was a bit heavy and definitely hurt my back toward the end.)

The next few miles went fast and then a nice downhill run to the finish line! As I crossed it, I felt emotional. I looked for Zoey and Daniel and found them at the New Balance booth. We took photos, smiled and took an Uber back to the hotel. 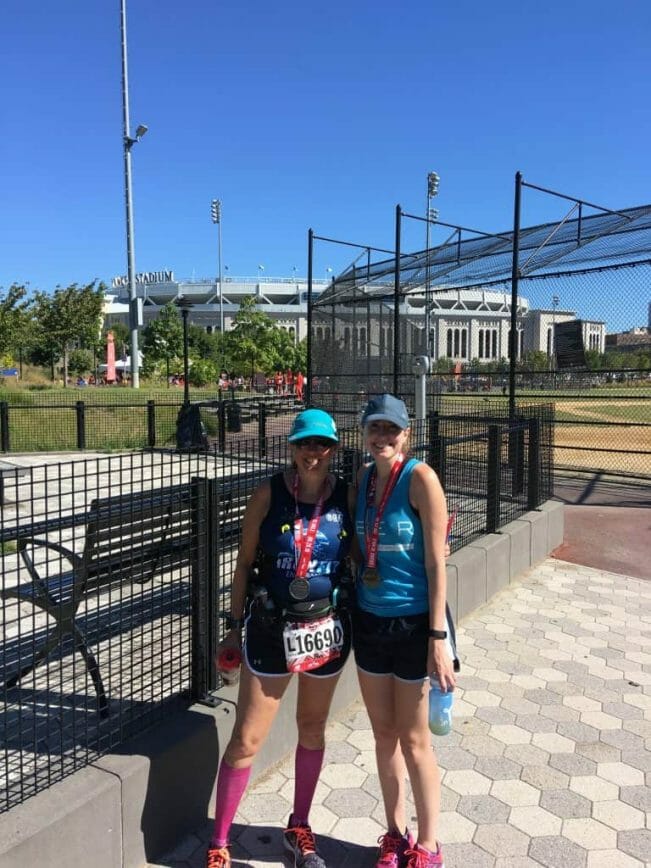