Whenever I wear a pair of Brooks Running Sneakers, all I think is, “run happy!” Recently, I reviewed a pair of Revel 4s. I felt they were similar to the Ghosts so I wanted to compare the two and see the difference. I asked their PR people if I could sample the new Ghost 13s to try them out. Happily, they let me!

To start, the 13s are so much better of a shoe than the 12s. They are incredibly comfortable, responsive, and sturdy. They have a good amount of flexibility in the toe and the toe box is medium — not that wide but not narrow either. (If you have the 12s, definitely buy the 13s. You will love them!)

They have a nice arch that you can feel immediately when you step into these shoes. I think these may be my favorite Brooks shoes so far! They are responsive and have a good bounce.

I actually think the Ghost 13s are a sturdier and more stable shoe than the 12s. And, I really liked the 12s. 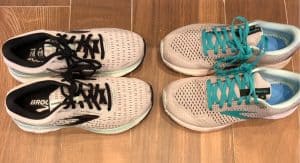 These two shoes are similar. They both have good arch support and have a great deal of cushioning. They are both made for road running.

The difference – the Revels have an 8mm drop from toe to heel, whereas the Ghost 13s have a 12mm drop.

Now that I’ve tried them at the same time, I feel the Ghost 13s are by far better shoes than the Revels. The Revels are better for shorter distances where you need the spring and the speed. Whereas the Brooks Ghost 13s may not be as fast but they are a solid shoe, great for a longer distance race. Both shoes gives you a smooth ride.

The Ghost 13s has a new “DNA LOFT” cushioning, which now extends throughout the midsole for an even smoother transition from heel to toe. The 12s didn’t have this and it makes these shoes the best that I’ve tried yet in the Ghost line!

As I mentioned at the beginning of this blog, when I wear the Brooks Running Shoe, I think “run happy.” I love both of these shoes but if I had to choose one and the budget wasn’t an issue, I would choose the Ghost 13s over the Revel 4s. Although they are both good, solid shoes.

You can get them by going to the Brooks website at HTTP://www.BrooksRunning.com. The Brooks Ghost 13s are $130. The Brooks Revel 4s is $100.