I met Eva Solomon, the race director for Epic Races, several years ago. At that time, we met over lunch in Manhattan and she told me about Epic races. I was intrigued. I was particularly fascinated by the Swim to the Moon race, a 10K, 5K, 1.2 mile,s and .5 mile swim race in Hell, Michigan. 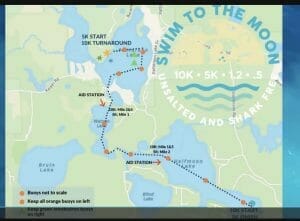 Swim to the Moon

I originally signed up for the 10K swim. But, due to covid, rebound covid, and then pneumonia, my training time was limited so I dropped down to a 5K swim instead.

I was so excited to learn that my WeREndurance teammate, Jackie Brown of Michigan, was planning on doing the race as well.

Since I would be in the Ann Arbor area, my partner, Lisa Gordon, booked a book tour at Nicola’s Books. I arrived in Detroit on Friday and went sightseeing. Then, drove 50 miles to my hotel in Chelsea, Michigan, about 20 minutes or so from the race site.

The next day, I had a book talk and read at Nicola’s Books (Schuler Books) in Ann Arbor. We had about 10 people in attendance and I was thrilled because the only person I knew in Michigan was my teammate who also came to the book signing. We had a great discussion with some intriguing questions. 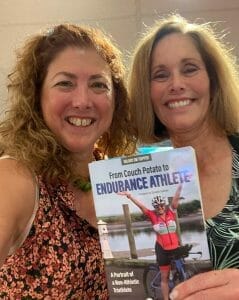 Following that, I went and picked up my number.

Epic Races organization was outstanding. The volunteer scanned my QR code and gave me a tee shirt, a special needs bag, and my number, and sent me on my way.

The next day, I got to the park early. It was dark and the roads were windy and hilly. The rain was coming down steadily but according to an email that we got from Eva, the race was still going on. I secretly hoped it would stop so that we didn’t have to wait in the rain to take off. Once we were in the water, I didn’t care. I just didn’t want to get a chill at the start.

I parked my car and checked into the race site. The 10K athletes were getting ready to take off. I looked for the bus and was told it was up the hill. Thankfully, when I got up there, the rain stopped!

I stood in a long line for the bus that was going to take us to North Star Lake which was the 5K start and the 10K turnaround. While standing in line, I met Jeff from Long Beach, NY (my hometown). It turned out we knew a lot of the same people. Jeff was Eva’s cousin. 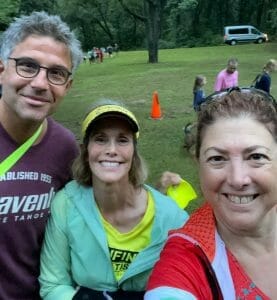 There were very few people wearing wetsuits. Jackie and I wore one. I also wore my personal buoy to keep my gels and hydration in while I swam. 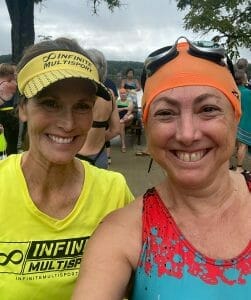 As we waited to start, we both put on our wetsuits. We checked our gear bags which Epic had waiting for us at the finish line. Before we started, together all of the 5K swimmers sang the Star Spangled Banner. It put a chill through me to hear everyone sing together.

Everyone was anxious. Some of the swimmers told me that there was going to be a current against us as we entered Halfmoon Lake. I didn’t care. I just wanted to get in.

Eva called the elite athletes and told them to take off first. Then, one by one three seconds apart, we were in the water. I was anxious to get in. I couldn’t wait to swim in the lake and interconnecting lakes.

We took off.  The one thing that stood out to me besides the absolute beauty of the swim and the water, was that the course was so well marked.

The swim was incredible. About a mile into the swim, there was a tunnel. It was short and dark but it was so much fun!

Then about a half mile later, there was a footbridge that we swam under. I had the biggest smile on my face!

But for me, just looking around and seeing gorgeous trees that were starting to turn colors made me so happy. Seeing magnificent homes out of the corner of my eye was also truly special. I kept thinking that I wished I had my camera with me. It was that beautiful.

At every mile, there was a rest stop to get gels and hydration. I stopped at mile 2. (I needed a pee break! haha) While I was there, I had some Gatorade and a gel. I felt strong and quickly started swimming again.

Thankfully, my shoulders didn’t hurt me like the Maggie Fischer race. I felt like I could keep going forever.

As we were coming into Halfmoon Lake, there was a rush from the 1 milers and the half milers. I tried to stay far away, but I was very far away. The kayakers and the paddleboarders kept telling me to move to my left. 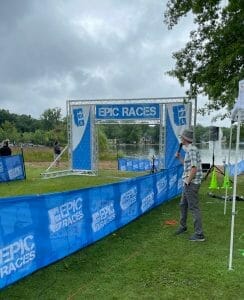 I saw the finishers chute and remembered what Eva said in an email, “give us a big smile and hands up at the finish line.” That’s exactly what I did. I gave a signature pose. I was so happy. Swimming in this race I was in my happy place. 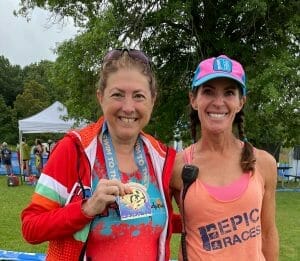 After getting gorgeous medals, the volunteers were making pancakes, and egg wraps. I tried both. There were cookies and bananas but I stayed away. 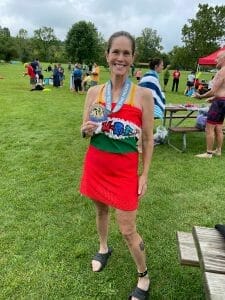 Jackie found me eating the pancakes. She came in a few minutes after me. We were both so excited it was finished and looked at each other and smiled. 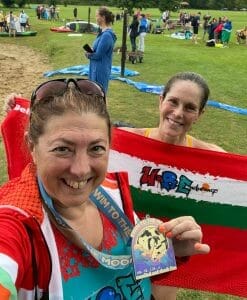 We did it and it felt great! Hey, I would swim in Hell any day! It was that good! I may even sign up next year… Nicola’s Books told me that if I come back for the swim they would have me speak again… hmmm…