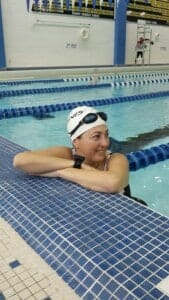 I remember when Nassau County first opened the Aquatic Center at Eisenhower Park on Long Island, NY. It felt like it was a couple of years ago but when I looked it up, it said it opened in 1998, that was nearly 20 years ago.  (Boy, I’m getting old!)

I never really thought much about it until a year or so ago, my husband and I were riding our bikes around Eisenhower Park and stumbled upon it. We went inside and saw an enormous indoor pool. It looked awesome.

Fast forward a couple of months ago, I received an email from one of my Iron Fit Endurance teammates that there was a new Masters group starting at the Aquatic Center.  (To be honest, I didn’t even know there were any other Masters Swim groups there.)

I’ve been pretty loyal to Open Water Swim LI. I think the head coach, Bryan Krut and Christina Boindi are amazing.  They are terrific people and Bryan and Christina really taught me how to swim.  (It was almost two years ago that I went into the pool with my friend Marti and tried to swim 25 yards. It was not a pretty site.)

Looking back at my training peaks (which is an online program that documents your training), I swam 350 yards on May 29, 2014. My after comment read:

“It was really tough. My heart was beating so strong. But it was easier today than over the weekend.”

Unfortunately, for me, OWS LI holds their winter meet ups at a High School in Bohemia, which is a little too far from my house — it’s over an hour a way. So when my friend and teammate brought up the new group to me, I was interested in giving it a shot.

When I got to the pool, I met up with Maggie Strovickova and Roy Lester.  They are the two running the new group called, LI Masters. The swims are fast and tough. I’ve been averaging around 2500 to 3200 yards per session.  But, what I love about it is, that Maggie actually gets in the water with you and tells you exactly what you’re doing wrong or right and how to get more efficient on the swim.

I didn’t really know much about Maggie except that she was an extraordinary swimmer.  When I got to know her better I found out that she was a competitive swimmer at age 8 and went on to win many national championships. In 1991, she got into triathlons and quickly became one of the best triathletes in her native country, Slovakia. She would have been in the Olympics had she not gotten injured.  She is an extraordinary person and I’m so glad I met her.

I’ve known Roy for years.  He’s a Long Beach person and so am I.  His children knew my children and our paths have crossed through the years.  I knew he was a triathlete and a swimmer but that was all I knew.

I’m impressed with their group. They definitely push hard and I’m already seeing improvements in my stroke and my speed.

So I’ve been going to the LI Masters twice a week in the morning and when I go to work, I’m totally exhausted!  (And starving too…)

And, as for Open Water Swim LI, I plan on going out to their Open Water swims at Robert Moses State Park (my favorite open water swim) and Heckscher Park a lot this summer.  (They’re not getting rid of me yet… )