I never realized how good it was to give back until now. I asked Jeff Galloway back in November, if I could start the Team Galloway LI group. He was thrilled and after numerous books and a qualification test, I was accepted as a program director for the LI region.

I put out a call on Facebook. I knew from my own personal experience that if someone else started this group up, I would have joined, no questions asked! After meeting Jeff at a RunDisney event, I was enamored. I wanted to learn his method and fast! But, it’s not that simple. Run/Walk/Run technique takes months, sometimes even years to master. 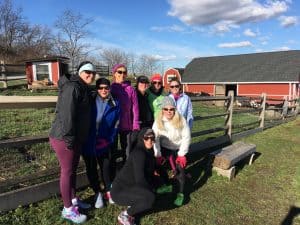 I was pleasantly surprised at how many people were interested in learning his method. We started with a group of 20 and met every Saturday and some Sundays from February through May. We had some of the coldest, most brutal days to train, but we all were out there. (If I didn’t have this obligation, I would have stayed in bed most of those days. So, I’m grateful to the group for getting me out of bed!)

We met on the Long Beach Boardwalk, Cedar Creek Park, Heckscher Park, Massapequa Preserve and some other places. I tried to change it up each week to make it interesting. I’m totally grateful to our guest speakers who came out and gave us some tips and strategies and in some cases, ran with us, including: Ken Nuss, Danielle Sullivan, Vicki Ventura and the folks from The Runner’s Edge in Farmingdale!

I had some great memories of this first group that I will never forget. For starters, the runs were incredible and the people were even better!  I was so inspired by everyone in the group.

The first magic mile, we had a couple of our runners do a 9 minute mile. When we did our second one six weeks later, one person came in at 7:40 and the other 8:15 minute mile!  Everyone else who did it the second time, improved by at least 30 seconds faster. I think this convinced everyone the program works. 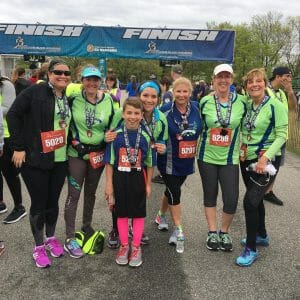 The best part for me, was when Team Galloway LI ran their first 5K together.

Many of the people had never run a mile, no less a 5K! Seeing them all cross the finish line brought tears to my eyes. I was so incredibly proud of them and proud to be associated with Jeff Galloway and the Galloway teams across the country.

We held a little after party after the race, where everyone received a beautiful medal.  I was so psyched after that, that I decided to go for a swim to end the perfect day!