Three years ago, I signed up for the UJA-Federation of NY Aqua Run and, when I went on the training swim, I had a panic attack. That was it. I didn’t do the race that year and waited nearly three years to do it again.

I was sick the weekend before and wasn’t able to do the EventPower LI Mighty Hamptons race. I was bummed about it for a day or so and then, decided, why not redeem myself by competing in the Aqua Run? 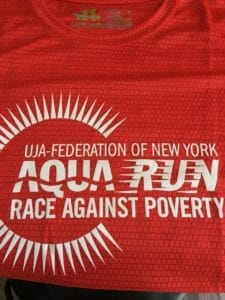 I drove to Tobay Beach from my new home in Merrick Woods at around 6:30 am. I picked up my number and got a great spot in the transition area. I laid out my gear and waited. I started to talk with the people around me. I only knew one or two people, which was unusual for me. 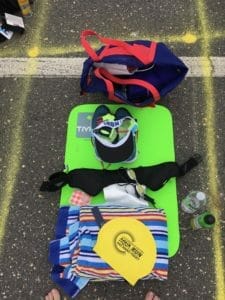 An announcement came on, “we’re going to have a yoga session, come join us.” 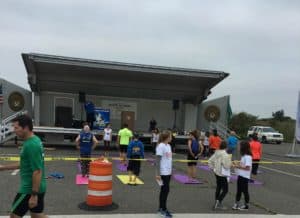 The woman next to me seemed very nice. Her name was Josephine and we were chatting for a while. An older woman asked if Josephine was going to wear her wetsuit.

“I don’t wear a wetsuit,” said Josephine. “I have enough buoyancy.” She pointed to her butt.

“Yeah,” the older woman said, “Heavy people have a lot of buoyancy, that’s why they are good swimmers.”

I thought I was going to die! How dare she say that to this sweet woman! Sometimes, I just have to shake my head. People say mean things without realizing it.

Josephine looked at me and I shook my head. “Do you think I look fat?” she asked me.

“No, absolutely not!” I said. “And anyway, you’re an athlete. That woman had no right to say anything and besides, just try to kick her ass…haha.” And, we both laughed.

“You look great,” I said. “Be proud of yourself for being out here and doing this!” She thanked me for saying that and with that, I put on my ROKA wetsuit and headed down to the water. 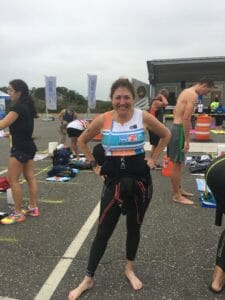 I decided to jump in for a moment. I knew I had no time to warm up but I wanted to get my face wet. I did. The water felt nice, a little cold, but not as cold as a couple of weeks before, when I could barely put my face in the water.

The men took off first.

The course was properly marked and there were plenty of rescue people and lifeguards out in the water. The women took off next. We went out as a group. I was surprised at how many people were there and yet, I knew very few of them.

It was an out of water start. When the horn went off, we all ran into the water. As soon as I thought I could swim, I did. I didn’t stop. I may have spotted poorly but I felt like I kept a steady all day pace.

I kept thinking about the time I tried to swim in Tobay at the Aqua Run open water practice and cried.

“Wow, I’ve come a long way since then.” I also thought, “should I do Miami Man? Is it too long? Will I do okay?” I washed those self doubts away quickly and tried to focus on what I was doing.

When I saw the last yellow triangle in the water, I knew the end was near. I swam until I couldn’t. I was surprised that many people stood up and were trying to run out of the water. Bryan Krut of Open Water Swim LI told us to stay as long as we could. “You’ll be faster in the long run,” he said.

I ran out of the water. It felt as if transition was far from where the water exit was. I entered transition, ripped off my wetsuit, put on my sneakers, visor and running belt and was off… (After the race, I learned that I actually PR’d the swim!)

It felt good. I thought I would be in pain from running 9 miles the day before, but I actually felt pretty good.

I crossed the finish line and as I did, Terry, the announcer, said, “Hilary Topper from Topper Reality in Long Beach…” It’s funny how he promotes my husband’s business. I wonder if he knows I have a PR firm and write a blog? Hmmmm… 🙂 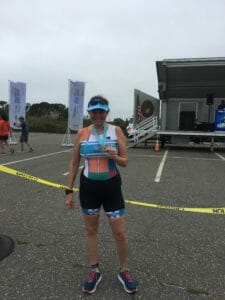 I was proud of myself for having a great time on the run and on the swim. I did the swim 2 min/100 yards and I did the run 11:50 per mile (a little slower than I wanted but who cares about a few seconds!)

It was a strong finish to a great weekend. As I walked to my car, I saw the woman who made the comment about the other woman. “You’re not staying for the raffles?” she said. “Last year, I won some amazing prizes.”

I smiled and got in my car and drove home. I was happy that I had the opportunity to go home early and enjoy the rest of the day… Fun race! 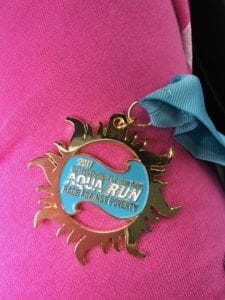