Have you ever read a book that you just can’t put down? 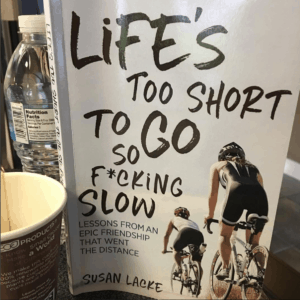 Life’s Too Short To Go So F*cking Slow — Lessons from an epic friendship that went the distance by Susan Lacke is one of those books.

Susan Lacke, a writer and college professor, met Carlos Nunez at the college in which she worked. He was her supervisor. At the time, she was an overweight, smoker in her 20’s. He was older, a mentor, an endurance athlete, husband and father.

Life’s Too Short to Go So F*cking Slow is a book about two friends — Susan and Carlos. She battles a divorce, weight loss, alcoholism and he continues to be a support to her along the way. When Carlos learned that Susan had a meeting in Idaho, he suggested she see him compete in Ironman Coeur d’Alene in Idaho. Her meeting was right there and I think he secretly wanted her to see what was possible. When he completed, he told her “anyone can do an Ironman.” She was so inspired, she signed up for Ironman Wisconsin. However, she just started running and had never even run a half marathon, much less a triathlon!

When she called Carlos to tell him what she did, he said, “you have to be f*cking kidding me.”

After that, the book takes the reader on a humous journey of Susan’s exploration into triathlons and Carlos’ coaching along the way. I literally laughed out load because I could relate to some of the situations she got herself into!

The book took a turn when the two friends had a little dispute and didn’t talk for a while. Susan thought she won the fight when Carlos called her and said, “we have to talk.” Little did she know he was going to tell her he had cancer.

From being a “hard-ass” coach to fighting his way through stage 4 cancer, which the doctors told him he had six months to live, you gain a greater respect for the man Carlos Nunez was. This book memorializes him and although sad and in parts, I cried, it was uplifting. Carlos appreciate everything in life. Even in his struggles with chemotherapy and aggressive surgeries, he still got on his bike and rode up that hill to appreciate the beauty.

He told Susan he trained and competed in Ironman to feel alive. Susan took his love and his passion for the sport of triathlon, and in her new book, Life’s Too Short to Go So F*cking Slow, she showed the reader that we too can take Carlos’ passion and love and “go the distance” in whatever we set out to do, whether it be an Ironman, 70.3 or just jumping out of a plane to feel alive.

The book is available through VeloPress. Go to https://www.velopress.com/tooshort for more information or to order the book. I loved it and if you love triathlons, you will adore this book!