And what’s the deal with maple water? 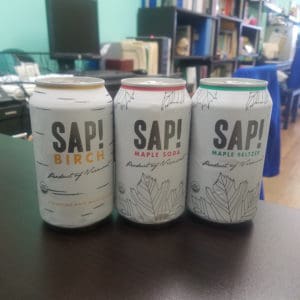 Maple Water has been the latest craze. I keep reading about all the health benefits and the super hydration benefits you get from drinking Maple Water, so when SAP reached out and asked to me check out their new products, I obliged. At the same time, I started to research whether or not this whole maple craze was a fad or something that us athletes should consider drinking.

The claims suggest that maple water has a ton of benefits including bone strengthening and anti-inflammatory properties. I’ve also heard that it has more vitamins and magnesium than water and it’s a great way to hydrate. I bought some of the water and thought it was “okay.” So, if it has all these health benefits, then it’s worth me trying these new drinks out to find out if I should invest in them for upcoming races.

According to the Huffington Post, the health benefits are minimal and it compares to Coconut Water. It’s obviously better to drink than any of the artificial stuff.

Sap! Maple are non-alcoholic beverages made from 100% pure maple syrup straight from the maple trees of Vermont. They are caffeine free with no sugar added. They have three products, Maple Sap! Soda, Birch Sap! Sparking Water, and Maple Sap! Seltzer.

This soda product of their brand has the most sugar compared with the other two. You can definitely taste the sweetness that comes from the pure maple. While it does taste sweet at first sip, there is a strange aftertaste that sits in your mouth. According to the can, the only difference between the soda and the seltzer product is the natural sweetness and nutrient level of the maple sap.

From first taste there is a noticeable difference to the soda, mostly because of the sugar content. If you are more conscious about how much sugar you are in taking, this may be a better option while still having a hint of maple flavor. This one has less of an aftertaste and subtler flavoring. This was probably my favorite of the three, a happy medium with sugar and flavor.

This was probably my least favorite of the three, in terms of taste, though it has great nutritional benefits. Birch tree sap has been consumed as a natural tonic for ages. The minerals, amino and organic acids, and other nutrients have been known to help boost immunity, fight fatigue, and detoxify the body. This all sounds great, just wish I could get over the taste! This drink also has the least amount of sugar compared to the other two.

While the taste wasn’t my favorite, I decided to check out the nutritional value of these drinks. According to SAP! Maple’s website, maple sap and birch sap naturally contain some nutritional benefits. “Maple sap has 46 naturally occurring nutrients and naturally is low-glycemic. Birch sap is high in manganese is known as a health tonic in cultures throughout Scandinavia, Eastern Europe, and Northern Asia.” On top of that, the actual process of harvesting sap is a sustainable practice that does not harm the tree!

Love to hear your thoughts on Maple…