The Cross Bay Swim was postponed on the Wednesday evening before the event.

I was grateful for two things – 1) that they postponed it early enough so that we didn’t wake up at 4 am to find out it was canceled and 2) that they rescheduled the event.

Two Miles in the Open Water

I was swimming in the pool an average of 17,000 yards a week. So on one of my first long swims in the open water, Ray and I swam for 2 miles.  It was a huge accomplishment for both of us. 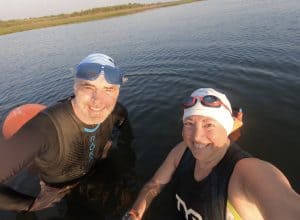 Danielle, my coach, suggested I swim with Katie on some of the long swims since she was also doing the race.

At first, I was a little intimidated but when I finally swam with Katie, I realized we had a similar pace, which was awesome!

Four Miles in the Open Water

Katie and I kept swimming back to the Marina and forth to the Bonzai tree.  When we were a couple of miles into the swim, we bumped into my teammates from All Women’s Tri Team and snapped a quick selfie. 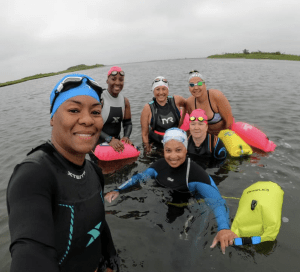 At one point, we were at the tree again. I said, “why don’t we go to the buoy in the middle then go back to the tree and back to the beach?” Katie agreed. “That’s what we did last time,” she said.

When we got back to the buoy for the second time, my watch said 3.98 miles. I knew that was it. We wrapped it up by getting to the beach and swimming over 4-miles or 7203 yards.

We were both really excited.

That four-mile swim was no joke! I was so exhausted and stayed in bed most of the day. My shoulder hurt, my arms hurt, even my upper back felt sore. As a matter of fact, my whole body hurt me. I was grateful it was a Friday and I had the day off. 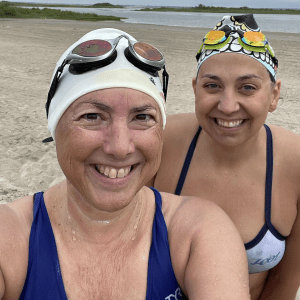 Five Miles in the Open Water

When we all found out that the event was postponed due to a tropical storm, I reached out to Cathy (who was also scheduled to swim the event) and Katie. Cathy didn’t feel comfortable swimming in Tobay after the tropical storm and Katie was unable to as well. I had also asked Thomas (a friend who was supposed to swim at the Cross Bay event as well). He put out a call to his swim buddies but no one wanted to do it. 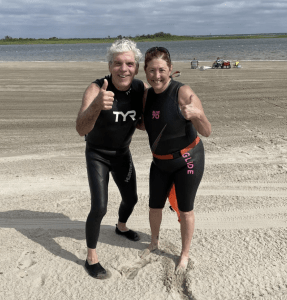 If the event was canceled or postponed, I wanted to swim the mileage anyway! My goal was to swim at least 5 miles and I was grateful Thomas wanted to swim with me.

Since Thomas was a much faster swimmer, he swam zig-zag around me to get it done. He stayed with me the entire time and ended up swimming 6 miles while I swam 5.25 miles.

I was thrilled. It made me feel so good to get this done. Now, when the race hopefully happens this Thursday, August 12, I will feel ready!