This was my first triathlon in Sanibel, Florida. It’s fun to read these old race recaps because it shows you were you were and how far you’ve come. I hope you enjoy and share with me your first experience! The Capitiva Triathlon was held in September, 2014.

My alarm went off at 4 am. I jumped out of bed at the South Seas Island Resort in Captiva, Florida and started to put on my race gear. I braided my hair and was ready by 4:15 am, so I started the coffee pot. Marti DiPaola, my running partner, was still sleeping. I heard her alarm go off and she came out of the bedroom. “You’re up already and ready to go?” she asked.

The night before the race

The night before, we talked about being at the transition area at 5:15 am. It closed at 6:45 am but we wanted ample time to put our stuff out and get ready for the big day. This was our first triathlon and we didn’t know what to expect.

The morning of the race

We left the house at 5 am and rode our bicycles about a mile and a half in the pitch black to the race site. There were some cars that passed us and they offered temporary lighting but for the most part, we rode in the dark. It was pretty scary.

When we got to the transition area, we walked in and found our spots. I was number #616 and Marti was #508, so we were in different sections. I found my spot and lined up everything including the bike. There were a lot of first timers there so their stuff was all over the place. Some people spread out while others were compact. Some had their gear in the front of the bikes while others at the rear. I wanted to do it right so I put mine compactly by the front wheel of the bike.

After I finished, I went to find Marti. I wanted to make one more pitstop to the bathroom and borrowed her flip flops. After using the porta-potty, I heard my number called. “Number #616 please report to your bike.”

I dropped off Marti’s flip flops and ran to my bike. “You’re not in the right spot,” said one of the women. “You’re in the wrong area.”

I got a bit frantic. I ran around looking for the right spot. Found it. Pulled my bike off the rack and ran back to get all my gear. Marti found me and helped me set up.

After I was settled, Marti said, “let’s go to the water and warm up before the race.”

So we both went barefoot and followed the crowd to the water. We stepped on shells and other hard objects along the way. When we got to the spot, which was about a ¼ mile away, we put on our caps (I had a pink one and she had a white one because we were in different age groups) and went into the water. I swam out to the buoy and back. I wanted to make sure I could do this. I did it without a hitch and felt confident, even though the last buoy looked really far away.

The Elite racers were off, followed by the white caps, Marti’s group. There were a few more groups that went in the water before the pink caps went in. When the horn blew, everyone with the pink caps ran into the water. It was insane. Everyone was in a panic. People were throwing their arms all over the place. People were kicking and punching me as I swam, but I didn’t let that bother me. I was kicking and punching people too. There were a lot of people in the water, but I felt safe. There were plenty of lifeguards there too.

As I swam, I kept thinking to myself, I can do this. The nose plugs won’t fall off and I can do this. I didn’t stop. I kept moving my arms and kicking my legs. The first buoy came and went. I had one more to go. I could do this, I thought to myself. I got this. I kept thinking about what my coach, Richie Caiazza of Team Tri-Global, said “just swim your heart out.” I also thought about Bryan Krut from Open Water Swim LI, saying “just swim and take it easy and breath. Don’t panic.”

I tried to stay calm and relaxed. I finally got to the last buoy and turned toward the beach. I swam until I felt the bottom and then stood up and ran out of the water. There were a ton of people cheering us on. I tried to stay focused and get to T1 as soon as possible.

T1 and the Bike

I ran into the transition area, found my bike and gear. I dried off my feet and threw on my bicycle shoes, put on my helmut, glasses and picked up the bike from the rack and I was off. I tried to run out of the transition area the way Coach Richie showed me. I got to the mount line, got on my bike and rode five miles down a winding rode. There were some sharp turns on the rode and when we got to mile five, there was a sharp u-turn. There were a ton of men passing me screaming, “on your left.” Some of them came so close to me, I thought my bike would fall over. I felt as if I were in the Tour de France (or maybe they thought they were!).

I was trying to go as fast as I could. I really couldn’t gage how fast I was going because there was no cadence sensor on the bike. So I just tried to follow people. I kept spotting the same man with a white tee shirt. I passed him, he passed me and we kept going back and forth. When I was behind him I tried to keep up with his cadence and go faster.

The roads were bumpy and rough. I felt like I was back at Heckscher Park. My bottom wasn’t happy but I kept going. I didn’t even want to grab a drink for the fear of slowing down!

T2 and the run

I approached the dismount line and unclipped my pedals. The man in front of me dismounted early and since he was directly in front, I had to dismount too. I ran the bike back into the transition area for T2 (bike to run).

I quickly found my spot, took off my gear and put on my sneakers and racing belt and I was off. There were tons of people walking out of T2 to the run, which slowed me down. I wanted to be able to run the 3 miles but found that between my breathing and my hamstring strain, I had to walk a little. I wasn’t alone. There were plenty of walkers.

We ran around the golf course twice. It had different terrain than I was used to – gravel, stone and sand. It went up and it went down. There was no shade and at that point it was getting very hot. During my first lap out, I heard, “hey Hilary…” I looked over and there was Marti about 100 feet ahead of me. I don’t know how she saw me, but she did and I wasn’t sure if she was on her first or second lap.

On the path, I met a young woman who reminded me of my daughter. She was walking. I was running behind her and passed her and said, “we can do this….”

After mile 1, I kept trying to focus on my kids and how much they mean to me. They both were so supportive during this training process and the fact that they believed in me and believed that I could do this got me through mile 2. I walked a little after mile 2 and found a man named Troy. He was 35 and was also walking. (I knew that because everyone’s age is stamped on the back of their calves. Not sure why they do this but apparently it’s common practice.) I encouraged him to run, when I felt my breathing got more in control. We started to talk a little. We both got each other through the end of the race and through the finish line where I threw up my arms and screamed, “I did it!”

At the finish line 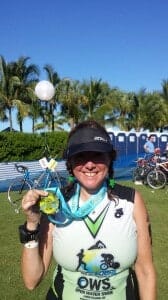 It was one of the most emotional races I have ever competed in. When I crossed the finish line, I was given a medal and a cold towel. I looked for Marti but I didn’t see her. I knew she was ahead of me, so I headed over to the transition area and thought she could still be there.

I didn’t see her and decided to wait. I called my coach and told him about the experience.

“Did you call your family yet?” he asked.

“No, you were the first one I called because you’re my coach,” I said. “And anyway, everyone in my house is probably sleeping!”

He congratulated me and told me he was proud of my accomplishment, which really meant a lot to me because he’s the type of coach that if you miss a workout, he’s not happy and let’s you know about it.

I finally found Marti. We went over to see how we did and found out that we were only 3 minutes apart. We hugged and expressed that it was amazing to complete our first triathlon together!