Every year, nearly 1,000 cyclists die and another nearly 500,000 get hurt as a result of a driver texting, not paying attention or distracted in some way. The book, Gratitude in Motion – A True Story of Hope, Determination and the Everyday Heroes Around Us by Colleen Kelly Alexander is an uplifting book about one woman’s fight to get back what she lost after being run over by a truck when she was cycling. 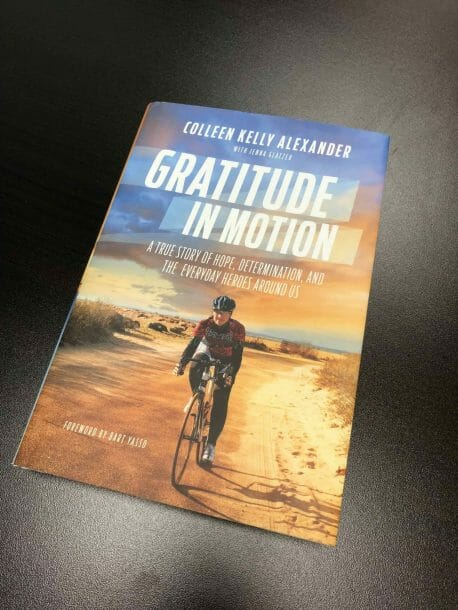 As I was reading this, I thought about Matt Long, the NYC firefighter whose book I reviewed last year and who was honored at the NY TRI EXPO ’16 for his amazing story of determination. When he spoke, he was inspiring. He is an incredible person who has overcome so many obstacles, very similar to Colleen Alexander. He became one of Colleen’s mentors.

Both Matt and Colleen’s stories moved me. Matt was run over by a bus and Colleen a truck. Both underwent enormous amounts of surgeries and years of strong will to come back.

In Gratitude in Motion, you learn that Colleen was brought up in a religious Christian household. God was important to her and to her family and the basis for strong will.

After almost dying when a truck ran her over,  the author went through a period of depression before she had an enlightened moment.  She realized that it was more appropriate to be grateful and appreciative then it was to be negative and depressed.

This woman had been through so much from having two broken marriages, finding out she had Lupus and then having a truck crush her. Yet, with all of this, she endured. Her incredible husband, Sean, was one of her guiding lights. The others were people she didn’t know who helped her, prayed for her and admired her. She touched people in ways that she will never know and people reciprocated with her. After the accident, she tried to thank everyone and send out love. (It’s much easier to be negative but positive energy goes a long way and always comes back!)

The book is emotional. Alexander writes so eloquently, you can’t put the book down. (I finished it in two days!) You feel her pain. You feel her joy and you feel her determination to continue to achieve her goals. Like Matt, she is a special person who I’m sure if you meet her, you will fall in love with her. People who are giving like that are rare, but they are out there.

Colleen had been through so much, yet she still had a positive spirit. At the end of the book, she provides the reader with ways to be a “hero,” and recommends giving back to a half dozen or so organizations, including giving blood. (If it weren’t for the dozens of people who had given blood, the author may not be alive today. Therefore, she is grateful.)

I loved this story, not the story itself but the person that Colleen Alexander became out of it. Following the accident, she completed 50 races, 40 triathlons and four half Ironman events!

I encourage everyone to buy the book on Amazon for $17.99. It’s worth the read.