An Ironman on Top of the Mountain? 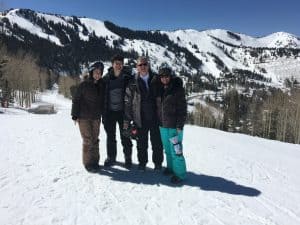 I went skiing with my family in Utah this past March. It was spring break for my son, Derek, who goes to UC Berkeley and my husband and I wanted to meet him out west. So, where was the perfect place to go? Park City, Utah!

Derek met us at the airport and two days later, my daughter, Zoey, joined us at the hotel. Zoey lives in Manhattan. It was amazing to be with the two of them. (I’m most happiest when I’m with them!)

We skied Park City and the Canyons. On the last day of our trip, we went to the Canyon. At the top of the hill, I saw some guy wearing an Ironman Lake Placid 2016 jacket. I had to talk with him.

“How was Lake Placid?” I asked. I knew the answer. Many of my friends have done it and they love it.

I told him I was a triathlete too and he said, “you plan on doing it?”

I told him not this year. He asked me where I was from. I told him Long Island. He said he was from Long Island too but now lives in NYC.

It’s always so cool to meet other triathletes. Don’t you agree?