This was a race I did in November 2018. It’s memorable because 1) I got to see my dad and my brother’s family and 2) because we ran through the Miami Zoo. Check it out here…

From the time I signed up until after the race, I was amazed with the organization of the race and logistics. And, I’m not just saying this because I received a comp to participate, I know what it takes to put on an event of this magnitude and I was extremely impressed!

These guys had everything covered, including a full array of hotels in the area. I booked the Holiday Inn Express because of its proximity to the race.

At the Expo in Miami:

Instead of going to the hotel first, I went to the expo, held at Penny and Larry Thompson Park, to pick up my number.

The swag bag was awesome. Participants received a t-shirt (with all athlete’s names on the back), a visor, bag, water bottle and a host of other goodies.  So cool! 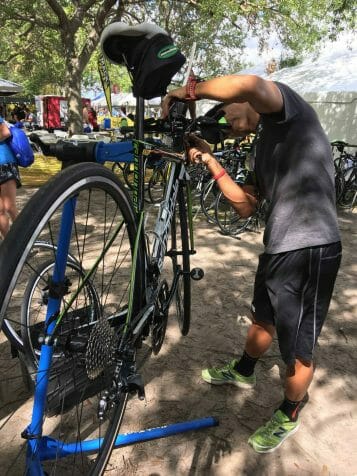 After that, I went over to Mack Cycle to pick up my rental bike. (After some investigation, I found that shipping my Felt down to Miami would cost me more than a round trip ticket, so I decided to rent.)

I gave the folks at Mack my pedals and they handed me the 48″ Cannondale Slice TriBike. The problem, the seat was way too high. They were great. The young man sawed the seat and dropped it all the way down. I took it out for a spin and noticed that the gears weren’t working right. The same mechanic checked it and made adjustments.

My only issue was the saddle. Unfortunately, I didn’t bring my own. I didn’t think about it. After the test spin, I knew I would have issues on the ride.

I left after hearing presentations on course management and checking out the booths at the expo. I put in the address of the hotel in my GPS and was surprised when it said it would take 30 minutes to get there. Hmmm, I thought this was the closest hotel to the race? I shook my head and followed the GPS.

Thirty minutes later, I was at a trailer park. I drove up and down the block but I didn’t see the Holiday Inn.  I realized I left off one of the numbers and put the real numbers down in the GPS. This time, it took me 30 minutes back to the Miami Zoo area and brought me to the right place. How frustrating! 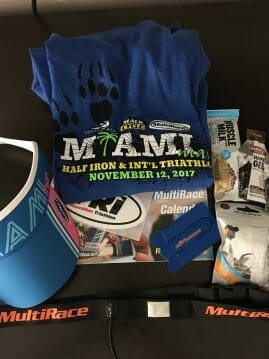 I checked in. The hotel was much nicer than I had thought it would be. I was given a king sized bed in a rather large room. As I started to unwind, I got a call.

“Mrs. Topper, I just wanted to make sure your accommodations met your expectations,” the receptionist said. Boy, that was nice!

When I went down to reception to find out where to eat, the folks there directed me to a mall, five minutes away that had every cuisine imaginable.

After dinner, I went to bed early. I kept waking up every hour or so. I was nervous and anxious. I kept running the race through my head.

The Day of the Race:

At 4 am, I got myself ready for the race.

I parked and the nerves kicked in. I threw up. I know, too much information but I couldn’t stop. I was embarrassed. Some of the triathletes walking by were making comments. I ignored them.

I got myself together, went over to transition and set up.

I overheard my neighbor saying, “Oh, I didn’t realize that…” She was moving her stuff to the front of her tire. I always thought to set up in the rear. But I didn’t want any issues so early, so I also moved my stuff. We had very limited time and before I knew it, it was 6:15 am and transition was closed.

An announcement came on: “Wetsuits are illegal in this race. The water temperature is too warm.” There was a sigh.

Now, I had two hours plus to wait around and watch as all the other races got underway. There was a duathlon, an aquabike, an aquarun, half course and international. I did the International.

At 7:30 am, I headed over to the beach where the swim was starting. I noticed that people were practicing. I wondered if I would have issues with the swim with no wetsuit. I saw a few people wearing swim skins. I left mine back at the hotel. Oh no!

I knew I would be fine once I was in. 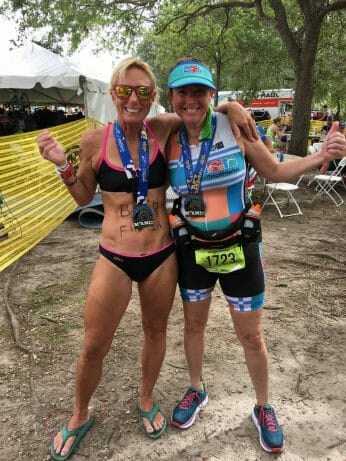 I continued to wait. At 8:15 am, one group went off, then another, then another. Our group went off at 8:35 am. As we were waiting, I talked for a few moments to a woman in my age group. We were called up. An elderly man said to us, “you are the best looking group.” We laughed.

Three, two, one… we were off. We ran into the water. As soon as I was knee deep, I started to swim. I could hear Brian from Open Water Swim LI say, “JUST GO… ”

I swam around the lake. It was magnificent. Between the surroundings and the cool fresh water, I felt like I was in heaven. I saw the swim exit. I noticed people easily climbing out. I had a bit of a dizzy spell — stood up and shook it off.

I ran into transition, quickly put on my gear and headed out with the bike.

I easily mounted and took off. The first five or so miles were a breeze. What headwind? I was going at a nice pace of 17 mph. I was feeling happy. I love this sport.

There was a lot of traffic on the streets. It was supposed to be clear within two miles, but it didn’t. The police watched and stopped the cars as the cyclists drove by but at times, cyclists were going in and out of cars. It was dangerous.

By mile 6, I was head on into the wind. I kept pushing but I was having issues, between the seat being very uncomfortable, the gears getting stuck and my legs burning, I could barely keep a pace of 10 mph.

As I was pushing, a woman I had been talking with by the swim start caught up to me and was about to say something, when suddenly, I saw another woman get very close to her. At one point they were so close to each other, I didn’t know what was going on, were they doing that on purpose?  And then, I saw the crash. She flew off the bike and went down. The other woman circled around to see if she was okay and I was in a situation that I felt that if I stopped, I would have crashed too, so I kept on going.

I felt so bad and for the next few miles my head was in a negative place. I couldn’t wash away the image of the woman flying off the bike and yet, she was coming to say something to me. What was she going to say?

I refocused on trying to fight the wind. People passed me and said some negative things to me, but I tuned them out. The heat was starting to get to me too. I could feel the burning on my back. I was uncomfortable and starting to feel miserable.

Finally it was over. I was glad I brought my computer on the bike to see the distance. It was shorter than I expected but I couldn’t even fathom the idea of doing that route again.

I dismounted and tried to run the bike into transition. I put on my sneakers and ran out for the run.

The Run Through the Zoo:

I was excited for the run.

The start of the route was gorgeous. We ran around the lake and then through some back trail areas until we reached the Miami Zoo. Then we ran in the zoo and saw the elephants, rhinoceros and gazelle. That was so cool, but didn’t last long because we were quickly out of the zoo and back in the outer areas.

There was ample water on the course. I needed it. We all needed it. The sun was so blazing hot. I felt like I was going to pass out and every time I was just about to feel like I couldn’t go on, I saw a water station, dumped a cup on my head and felt a little better to move forward.

I was not alone. I saw elite athletes walking. I saw so many people walking at one point I wondered if this was just a walk and not a race. I did 15/30 run/walk and then 30/15 run/walk. I tried to push but after that bike, I found it nearly impossible. 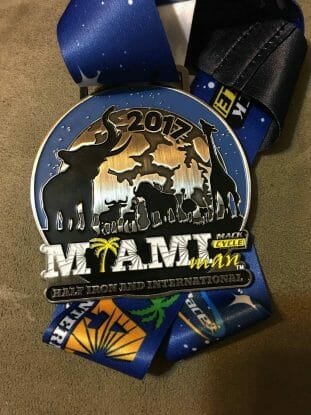 I thought I would see my family as I crossed the finish line, but I didn’t. I heard the announcer say, “Here’s Hilary Topper, chief curator of A Triathlete’s Diary.” I smiled. I finished the race and I was still standing!

I was handed a gorgeous medal, a wet towel for my neck and a can of Coke. I called my brother and he told me they were still in the zoo. I told them to enjoy and that I would meet them back at the hotel.

After the race, the organizers had chicken and rice and pizza for all the athletes. I took a slice but couldn’t eat it. As I sat at the table drinking my Coke, another triathlete told me that she’d been racing this race for eight years and that the conditions were most brutal this year.  (Figures. Throughout the entire race, I kept saying whatever could go wrong, will go wrong and just keep moving forward.)

I called my coach, Danielle Sullivan of Iron Fit Endurance, and said, “although the conditions were brutal, I’m glad I did it. I wanted to finish the triathlon season strong and I felt like I did just that.”

I was grateful to MultiRace for putting on an amazing race.

Now on to next season…