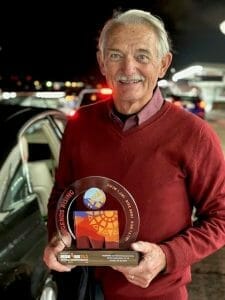 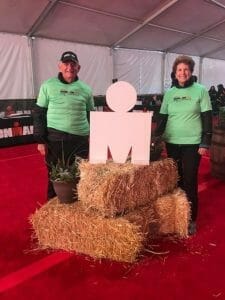 About 3 weeks before the race, I was going downstairs with two 12-packs of soda and both knees protested.  The right one got over it quickly but the left really started to hurt, all the time, more and more severely.  Training halted for a while. Then I decided to ride the bike and see what it did, rode 22 miles and it hurt 3/10 the whole time and that nite too.  Not good, stopped training except for one swim.
We flew to Las Vegas, rented a car, and drove to St George, Utah for the race. I continued to baby the left knee, ie only the right leg for stairs, up and down, no biking or running on it.  Got my bike from Tri Bike Transport, and rode it a half mile or so back to the hotel to make sure it worked ok.  My knee hurt a little riding and after. Pre-race VIP reception that evening, was a fun time, saw lots of friends we know in the tri world like Glenn Ponich whose wife runs the dog ‘n pony show.
The next day we volunteered at registration and packet pick up, always fun to do.
Welcome reception dinner that evening, fun time, great videos. We met a nice lady and her son from Germany. 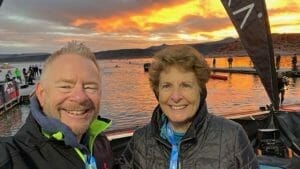 Kevin Lewis and Sara from the Greater Zion Convention & Tourism Office, and our German friend, Mohring Emese at the woman’s start on Friday. We relaxed Thur and then Fri watched the women’s race.  Fun to watch them race.  Later Fri had to take my bike to T1 and check it in for the men’s race on Sat. Off to bed early.

Up at 3;30 or so, walk down to catch a bus to T1, about a half-hour ride.  Get the bike ready and sit around a bit, found Donna who had arrived later on, on another bus, and got to chat. I am in wave #3 and on the ramp down to the water, saw Donna and the pair from Germany (she’d raced on Fri), and one of our Utah friends.  Off into the water when it’s our turn. 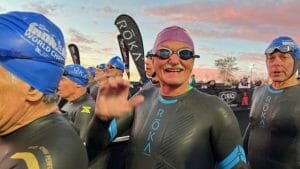 Took me the first two buoys to get going, just couldn’t get into my rhythm.  Had to breaststroke, swim head out, on my back once for a bit, then finally got going. The water was not that bad, much warmer than the air.  Finished in ok time for me, 50:36, a 42:10/mile pace, happy with that after the slow start swimming.

Run up to T1, and change all but shorts, cold, and hard to make hands and fingers work. It took forever to get changed and a long run to the bike.  14:33

The beginning of the bike was very cold, still kinda damp and wet, and the wind from my high speed as I zoomed along made it cold but the sun was out.  I had put a garbage bag inside my outside layer as the Tour de France guys do with plastic and newspapers.  It helped a lot to keep the wind from being too cold as I rode along. Finally took it out at the second aid station.  I also wore a swim cap thing under my helmet for warmth. Stopped at an aid station before the big climb and took that off and had a volunteer put it in my bike pocket.  This course is rolly polly for a while, then, later on, is where most of the big hills are.  The final part is in Snow Canyon and you go up and up and then it gets even steeper and up you go some more. At the top, you turn towards town and it’s a super downhill going in the hi 40s easily.  But some winds from the sides and traffic a lane over on both sides makes it scary, not nite time Carrier Landing scary but grip the handlebars tightly scary, no aero bars here, not even for the brave young pups.

Zoom in to T2, they have a catcher take your bike and you grab your Run Bag and sit in chairs to change into your run gear. I had a pickle juice thing but neither I nor two strong young guys could get it open.  Saw Donna on the way out, and told her I was ok.    8:35

A two-loop run, with less climbing than the year before. Guess they realized just how hard that one was and decided to change it a bit.  Still a lot of climbing in it tho.  Felt pretty good, my knee was not totally happy but not too bad.  Ran walked as usual.  Legs threatened to lock up once or twice but never did, thank God.  On the final downhill toward the finish, with 3/4 mi to go, I passed one guy in my age group (who had a number near mine), and
in the final half mile passed another one.  Passing those two put me on the podium, 3:03:53   14:02 min/mi 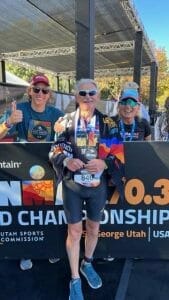 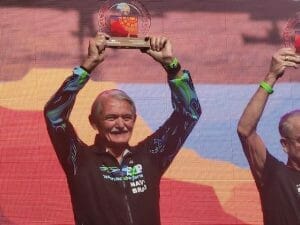 Into the finish chute, saw Donna in there.  Diana Bertsch, Sr VP of WW Championships came up and put my finisher medal on me, followed closely by Andrew Mesick, CEO of Ironman, who put my finisher towel on me too, and then Donna came up for a hug.  I found out later that Andrew had gone up into the VIP stands and got Donna and brought her down into the finish area.  He asked her if she wanted to put the medal on me and she said yes, but he’d probably prefer it if you and Diana did it and he said, we can do that, gladly.  Later on, the Ironman announcer Paul from South Africa came up to me and thanked me for wearing my South Africa World’s jersey.  Too funny.
Awards:
At the awards banquet, got my 5th place award, super happy about that. 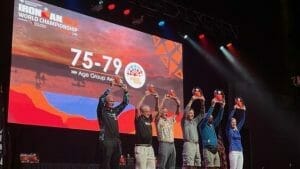 The top 5 men 75-79 and the only lady in that age group. Me in my E2P jacket. Thanks, Coach Christina Dorrer for getting me ready for this.