This race happened in July 2015 and it was a turning point for me. Find out why.

My experience at the NYC Tri started months ago when I clicked on the registration button for the event. Since then, I hired Danielle Sullivan of Iron Fit Endurance to coach me and diligently followed the workouts she provided to me on Training Peaks. I went to Excel Physical Therapy and Workout for strength training and injury prevention. I drove upstate with my All Women’s Tri Teammates to Open Sky Training Camp to hone up on my biking, running and swimming skills. I talked with a ton of triathletes who had done the NYC Triathlon — some who scared the heck out of me and others who told me it would be the best experience ever. And, I started drinking Shakeology for breakfast, watching the foods that entered my body and made sure to take salt tablets, Gu, First Endurance and Uptime before, during and after workouts.

The one thing I didn’t focus on was my mental health, and, the last couple of weeks leading up to this event were intense. I couldn’t sleep and all I kept thinking about was the fear of jumping in the Hudson River (and finding something that didn’t belong in a river) and climbing up steep hills on the Henry Hudson Parkway. I started to have a defeatist attitude.

The week before the race

The week before the race,  I was on the phone with Danielle a lot. I couldn’t focus on anything other than the race and thought seriously about getting a deferment or just not showing up.

I was still on the fence up until Friday before the race, but don’t tell my friend and workout buddy, Marti DiPaola because we had said we would do our first Olympic together and I was seriously thinking of backing out.  That Friday morning, I had breakfast with a client and good friend, Joan Axelrod-Siegelwax who put things in perspective.

“What are you afraid of?” she asked.

“Jumping in the Hudson and climbing up some steep hills,” I said.

“Hilary, you do this all the time and you’re good at it….” she said, not referring to any race but referring to life and business.  I took this to heart and I let it resonate. I started to focus on what she said.

Getting to the race 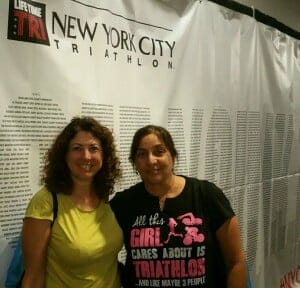 Logistics for the NYC Triathlon are rough. Thankfully, both Marti DiPaola’s husband and my husband agreed with a plan to drop us off on Saturday and pick us up after the race on Sunday. Marti and I attended a mandatory briefing and then attended a small expo, where most of the vendors were nutrition vendors.

The NY Triathlon is a well-orchestrated event. Both Marti and I were impressed with the way the event was done. We had a luxury bus pick us up at the hotel at 3:45 am and took us to transition. Unfortunately, it took us to Red transition, which was seven blocks away from our Yellow transition area.

There was a ton of walking. After setting up our transition site, we had to walk more than a mile to swim start. We waited and watched as the elite men took off in the Hudson River. While waiting, we saw used condoms and dead fish. This made us even more nervous to jump in!

The Swim in the Hudson River

Marti and I started this journey together and it seems like every first, we do together. When we went up to the swim start, we sat next to each other on the dock and jumped in the Hudson together. It was definitely something I will never forget! The river had a current so we swam faster than we normally do. Unfortunately, the current has nothing to do with the way you sight and my sighting was off. I ended up swimming toward New Jersey instead of the dock about a mile in front of us.

When I turned in toward the sea wall, I accidentally bumped into a woman who pushed me and said, “would you stop bumping into me?” (The Hudson is so clear that I made it my point to purposely bump her! Right…)

Once I got to the dock, there were three people pulling me up. I was tired from swimming the distance.  I got on the dock and ran barefoot to transition, which was nearly 3/4 of a mile away.

On to the Bike

I changed out of my wetsuit, put on my bike helmet and bike shoes and took my bike out of transition. I kept telling myself, you can do this, you can make it up the hill. (Someone told me that the steep hill was impossible and that there were lots of accidents on it.) When I got to the hill, it was okay. I climbed it. I didn’t have to get off my bike. As a matter of fact, I never got off my bike during the entire 26 miles. Before the race, I was so concerned that I wouldn’t make the cut off and I was able to do the bike in under 2 hours!  (For me, this was huge.)

Along the Henry Hudson Parkway, I saw lots of flat tires, dropped chains and water bottles galore on the road along with some hefty potholes. It was motivating to see my All Women Tri Team friends on the course screaming my name!

When the bike was finished, I was happy. I did two of the three disciplines. Now all I have to do is run through Central Park.

I put on my shoes and my cap and started to walk out of transition. I felt a tinge in my knee and a twinge in my back. I saw two of my teammates there, Lisa and Shidah who ran out with me. I was grateful to Shidah for giving me some salt that I desperately needed. They took off. I continued to walk it off.

As we headed toward the park from Riverside Park to Central Park, there was a whole All Women’s Tri Team cheering squad, headed up by Gail Myers who actually got the entire block to chant my name. Yes, I was a little embarrassed but it was wonderful to get their support!

When I got into the park, I saw so many of my tri/running friends including: Ed Gabriels, John Honerkamp and Stacey Fried. I also got to spend some quality time with my new friend, Patty Giovenco of the Brooklyn Tri.

Every mile, I would stop at the medical tent and get a packet of salt, which I put on my tongue and chased it with water. I also dumped a cup of cold water on my head to bring down the temperature in my body. It was extremely hot. The temperature was 95 degrees and climbing!

At mile four, I saw HJMT‘s Senior Vice President, Lisa Gordon and her husband there screaming out my name. It was so incredible to see them. I didn’t think they would make it in since they live so far away.

I became most emotional when I saw my daughter catching up to me at the water stop at mile 5 and walking besides me. “You’ve got this Mom,” she said, “the hard part is over. Just a mile left.”

I shed a tear. It made me feel so good for her to come out and support me. (I know my son would have come out too but he was on vacation with my father out west.)

“So proud of my mom for finishing the NYC triathlon! She is the the strongest person I know and will always push herself, despite all obstacles, to achieve her goals. She inspires me everyday ❤”

I dug very deep to cross that finish line. Once I got there, I was extremely emotional. I called my coach and talked it over with her and she was so excited for me. That made me feel amazing.

But to put things into perspective here, I realized at the end of this race, that I have the most amazing people in my life who love and support me and for that, I am truly blessed, even if it takes a race to find it out!

P.S. I promised my friend and teammate, Dereka Hendon that I would give her a shout out on this blog! Thanks for being there!