The day before the 40-mile bike ride, I had swum 2 miles in the open water. I came home, got my gear, and rode around Heckscher Park with my husband and son. After that, I was exhausted. I came home at around 5:30 pm and just went upstairs to bed. “No dinner, just bed,” I thought. All I wanted was sleep.

The next day, I woke up at 5 am. My bike and gear bag were in the car. All I needed was my hydration and gels and I was ready to go. I ate my banana mash, had a cup of coffee, and was out the door by 6:10 am.

I went to Cedar Creek. The parking lot had some cars, but it wasn’t packed. I parked the car, took out my QR TT bike, and started to get ready. My nerves were a mess. I couldn’t stop going to the bathroom, as if I were competing in a race.

As I got on the bike, I set the computer and was off. I went down the Cedar Creek path, to the end. Then a couple of minor maneuvers to Jones Beach. I passed the theatre, Zack’s bay, and the Jones Beach cut off. I continued on my way toward Tobay beach. As I was riding, I noticed the gardeners were out, mowing the lawn. There was grass spewed all across the path. As I kept going, I noticed a few trucks on the path. When they saw me coming they tried to move toward the grass as to not take up so much space on the road.

I continued to the end. That’s when I stopped. I find it difficult to make that sharp turn around with my TT bike. In the past, I would go out to the parking lot at Tobay and turn around. But, since the barricade was up, I was unable to do that.

So, I stopped. Took a breath, and turned the bike around. I headed back to Jones Beach. As I was heading west, the wind helped me along and I was moving at a 17-mile pace. It felt good. My bike loved it. (My bike loves going fast! Too bad it scares the heck out of me!)

I passed Jones Beach and headed toward Cedar Creek. Nothing was out of the ordinary heading back. It was a typical day trying to pass some people (as I shouted on the left and them not moving over), to people stopped on the bridge and me shouting, “please move.” That was typical. This day was no different than any other day.

On My Way Back 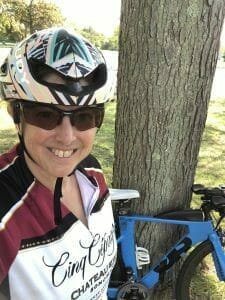 I got back to the parking lot and filled up my water bottle, and ate a Honey Stinger gel. Looking down at my bike, I said, “we are going to do this again.”

I’m not sure why it scared me to ride the trail twice. I know so many people who have done it. But, for some reason, it scared me. I needed to conquer my fear. “Just do it,” I said to myself.

I jumped back onto the trail and rode back to Jones Beach. Again, nothing exciting happened, just the usual. The wind wasn’t as bad as it could have been. (It gets windy there!) As I was riding, I didn’t even notice the cars on the Wantagh Parkway. My head was focused. I did feel pain. My wrist was bothering me from the accident that happened a few weeks before. My knee was twinging at the meniscus and my neck was bothering me from being aero. I didn’t feel 100 percent!

But, I was on a mission. My coach, Danielle Sullivan, told me to ride 30. I usually do what she says but I was so determined to do more. My daughter had just come back from a ride the day before and told me she went 34 miles. Ray, my training partner, went 50, and I only went 30 miles so far.

How can I let them all kick my ass???

I couldn’t. I had to get this done. Now, I was at the start of the Tobay path heading east. I secretly wished the entire path was open. I rode to the end. Again, I got off the bike and turned around.

As I rode back to Jones Beach, I noticed a lot of people working on the path. The smell of grass was prominent. My allergies were a mess. The grass was spread across the path. “I hope I don’t slip on this,” I thought.

Going Back for Another 4 Miles

When I got to Jones Beach, I thought, “I’m feeling pretty good. I’m going to go out another 2 miles and back and when I finish this, I will be at 40,” I said to myself. And, that is exactly what I did. When I arrived back at Jones Beach, nearly two hours into the ride, I had a bunch of ducks in front of me. The cyclist on the other side stopped. I stopped. We looked at each other and laughed.

I continued on my way back to Cedar Creek. I was in the final stretch. This is it, I’m going to get it done today. Between lots more cyclists, runners, and roller bladders on the trail, I had to weave in and out of people. I slowed down significantly. A couple was kissing on the bridge and I shouted, “coming thru…” I shook my head.

After so much anxiety and challenges, I finished. I felt a sense of accomplishment, just as I did in a race. It was awesome. I can’t wait to do it again! (I feel like a kid in a candy store, “I want more!!!!)