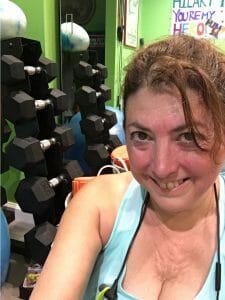 Women who are “big” on top, have issues working out. We need strong support bras to keep in place especially when running or competing in triathlons. My first coach told me that I should wear two bras instead of one when doing a triathlon. But, I never listened. It was uncomfortable enough in one let alone two!

So when Columbia approached me and asked if I would be interested in trying out a sample, I said, “yes.” They sent me a sports bra, a pair of capri workout pants and a cross check singlet top.

I took it for the test. First off, I do have to say that I had a hard time buckling the bra in the back. It actually slips over your head and then there are two buckles in the back. I easily slipped it over my head, but struggled to hook it in the back. It took a while to get it straight. 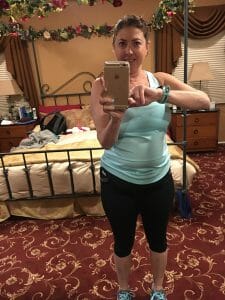 Once it was on, it felt pretty comfortable. I did feel the tag in the back and decided on my next try, I would cut it out so it didn’t bother me.