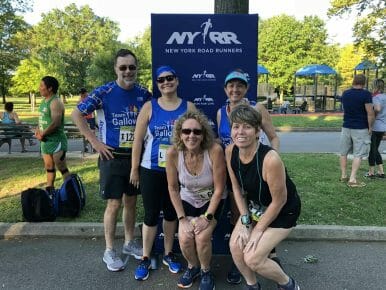 I had always wanted to run the New York Road Runners Queens 10K. But, every year, it seemed it came out on a bad weekend and I was unable to attend.

The appeal for me was that it is set in Flushing Meadow Park where the 1964 World’s Fair was held. Okay, okay, I know that was a long time ago, but I was just a baby when I was there and have never been back since, so this made the Queens 10K epic for me.

We were getting lots of emails prior to the event from New York Road Runners (NYRR), encouraging runners to take public transportation. Since it’s nearly impossible to get to Citi Field via Long Island Railroad, some of the members of Team Galloway Long Island — Kathleen, Colleen, Merril, Ray and I drove in on Saturday, June 16 and arrived in Queens by 6 am.

The weather was beautiful. It was around 75 degrees in the morning. It was a perfect day to run with low humidity. We picked up our numbers and waited until the start of the race.

There were more than 11,000 people running in this race and it was crowded. You really felt it on the road when the race got underway. There were lots of times when we all got bottlenecked behind runners who were either going slow or, they took up the whole row, which made it difficult to pass. 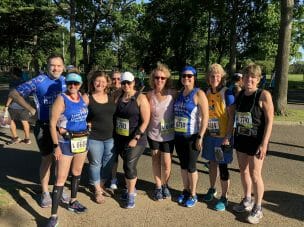 The race was relatively flat. There were a couple of bridges that made it a little hilly but it was generally flat.

It was great to run and see all different running teams from throughout New York. I was impressed to see someone representing Albany.

It was great seeing my teammates on the course. For the first mile or so, I ran with Colleen. Then we lost each other. After that, I saw Teresa, another member of our team. Everyone looked strong!

I had a big smile on my face when I saw the Unisphere. (Of course, I had to take a photo!)

The course was awesome. It went through Flushing Meadow Park and passed Citi Field, Queens Museum of Art, and the Flushing tennis stadium, where the US Open is held every year. 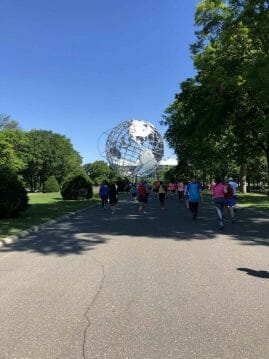 The first few miles, I felt great. On mile 4, I started to get a headache but I didn’t want that to ruin the run. I kept going strong. I stayed with a 30/15 pace and as people were screaming at the runners, “finish strong,” I thought, yes, I need to finish strong.

The race was well-organized with water stops at every mile. Instead of drinking, I poured the water over my head at each stop. Typically, since I run with water, I run past the stations but since it was getting very hot, upward of 90 degrees, I dumped water on myself.

After we all crossed the finish line, we met up at a designated spot, went back to the car, drove to a dinner, had breakfast and just felt great about the day!

I was particularly proud of my teammates for PR’ing a great race! 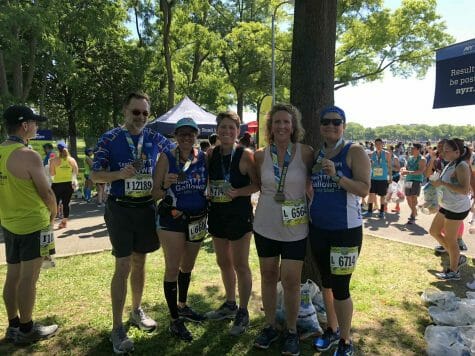