Swimming in the Tyrrhenian Sea

I went on a 10-day cruise around the Italian peninsular and then finished off the trip by going to Sorrento, near the Amalfi Coast. I was on a mission to get some open water swimming in, so I brought my long sleeve ROKA suit, my swim cap and Sable goggles. I wanted to go and I wasn’t alone. My husband’s sister and her partner wanted to go too. 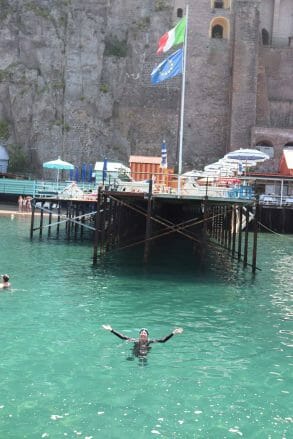 I thought I would get a lot more swimming in, but the weather was generally bad.

However, we did get to jump off the back of the Windstar cruise ship two days in row and those two days were incredible.

For starters, the water was ice cold and when I say ice I mean ICE! Putting my face in the water meant I was willing to burn off the first layer of my skin because it was that cold.

The boat was anchored in the middle of the Tyrrhenian Sea. There was nothing around for miles, land was a far swim away. So, I circled around the trampoline a few times. It was about 25 – 30 yards off the back of the boat. I kept trying to get my GPS to work but that wasn’t happening. I’m not sure if it was the time difference or if it was that we were in the middle of the sea, but whatever it was, it was annoying.

In any event, swimming in the Tyrrhenian Sea, although cold, was one of the best experiences I have had in a long time. I would jump any day, especially since I had my Roka wetsuit!

P.S. Readers of this blog can get a super 30% discount from Roka.