Still thinking about the Power of A Woman Pool Triathlon…

A couple of days before the race, I got myself ready. I pulled out my Pearl Izumi tri kit, my TriSports cap, my Base Performance salts and rocketfuel, my transition mat, my helmet, Pearl Izumi cycling shoes, running shoes and more! I had a whole checklist and put everything on my daughter’s bed (she doesn’t live home anymore so I was able to do that). I wanted to make sure I had everything ready for the race that Saturday.

I raced in the Power of a Woman event because many of my teammates from the All Women’s Tri Team (AWTT) participate. This was my second year. Last year, I had completed two sprint triathlons before doing this one. This year, I had eight sprint and olympic distance triathlons under my belt. I had been training since last summer non-stop. So, I was hoping to do much better than I actually did.

A coach once told me, “there will never be a perfect race,” and he was right. Something always happens that you have no control over. 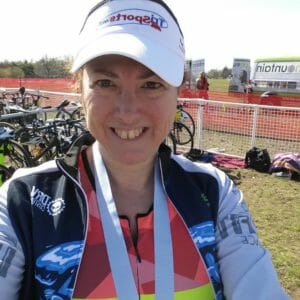 For instance, I started the pool a little too late. I should have moved up to a faster group. As I watched the people in the water, I wondered why everyone was moving so slowly. I should have realized it would be slow going when I edged into the side of the pool behind a woman who practically took up the entire lane. It was near impossible to get around her. It wasn’t until I finally caught up in lane 3 and jumped in front of her. So for me, the time was very slow in the pool.  The positive thing about that was when I jumped out of the water, I wasn’t out of breath!

I ran into transition and felt I had a lot of energy. I put on my helmet and my bike shoes and ran out of transition to the bike course. I was worried that I was going to have a bit of a panic attack getting on the bike, but I didn’t. I clipped in and went. The wind was incredible but the bike seemed to pierce through the wind. I felt good on the bike. I was out of breath from the wind and the cold air. (It was 45 degrees in the morning and only went up to 50 during the actual race. It felt cold after being wet from the pool.) I wore my Iron Fit Endurance jacket and kept it open. It may have held me back a little from the drag, but I’m not really sure. I got off the bike with ease, ran into transition, put on my sneakers and ran out along the grass to eventually a path.

Last year, I had so much trouble running on the grass. This year, although I felt it in my calves, I was okay. I ran and kept thinking, don’t stop. Just keep running. But, I stopped a couple of times – once at the water stop, once on the road after a slight downhill, and once on the grass before running through the shoot. I still PR’d my run by a few seconds.

As I was running, I was thinking I could possibly place if I could run faster. When I got back to transition, I was shaking. My body was so cold from the wind and I was feeling my asthma. My chest was so heavy and it was difficult to breath, even with the inhaler.

I started to put my stuff away and one of the women from my age group looked at me and said, “I won our age group!”

I congratulated her. I went to get my results and found that I actually did worse than last year. I was disappointed. I was hoping to do better. I’m not sure what I was trying to prove to myself if I did do better. So what?

I guess it’s just that I feel like I haven’t taken a break at all and by doing so, I would have thought I would have done better. It’s not like I didn’t do my workouts as they were written for me. In my moment of feeling bad for myself, a woman came up to me and was shaking her head.

“What happened?” I asked her.

“I was riding my bike and got a flat at the first loop. I’m so upset and disappointed,” she said. “I hope I don’t get a medal because I don’t deserve one. I was told to do the run after the flat and now I have to find someone to fix it.”

I felt really bad for this woman I didn’t know.

“You know,” I said, “triathlons are like life, whatever can go wrong, will go wrong. I know that doesn’t help to hear but it happens to all of us and the bottom line is — have fun and enjoy the experience, even if the outcome isn’t what you expected it to be.”

She smiled and walked away.

I started to think about the days events – talking with a woman who was riding a bike with a baby seat on the back of it. Talking with some of my teammates who feared the water but did the race anyway. They finished. They completed their goal to finish this race and they did. It was inspiring.

And as for me, well, I took my own advice and just enjoyed the experience, even though I had hoped for a better outcome.