This was a race I did with the All Women’s Tri Team back in 2015. It was such a fun race. Check out what happened below.

When I first started doing triathlons last summer, I should have started with EventPower LI’s Power of a Woman Race.  It’s a perfect race for a beginner triathlete or an experienced triathlete who wants to get faster. It includes a 400 Meter pool swim, a 6 mile bike and a 2 mile run.  This is considered a super sprint race. 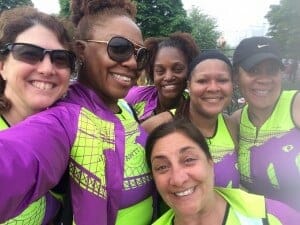 I reluctantly decided to do this race with my running partner, Marti DiPaola, and the rest of the All Women’s Tri Team. There were only two races that the team was participating in as a group and this was one of them.

I’m glad I did it. I wasn’t nervous. I felt prepared and didn’t stress at all.

It is so incredibly nice to go to a race where you know so many of the people! It just makes the experience that much more fun.

The day of the race, Marti came to my house at 6:00 am. My Trek Silque bike was already on the rack and my TYR transition bag was sitting in the car. I put her bike on the rack and we were off to East Meadow to the Aquatic Center at Eisenhower Park. There was no traffic at that hour and we parked in the front lot.  We were excited to wrack our bikes and set up our transition bags at the designated spot. 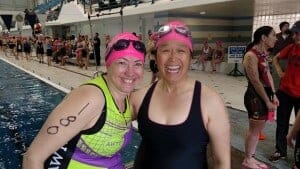 I was done with set up within minutes. A ton of people asked me to help them set up their spots as well. I was happy to help. Last year at this time, I didn’t even know what a transition area was let alone transition set up.  So it made me feel good that I’ve come this far.

After talking with some of my teammates from both All Women’s Tri Team (AWTT) and Iron Fit Endurance (#IFE), Marti, Dianne (AWTT teammate) and I walked to the aquatic center. We wanted to warm up before the swim start. I easily did 300 meters and then got out of the pool. I was shivering.

What I loved about the swim was the 50 meter length. It felt so good to keep going without hitting the wall. 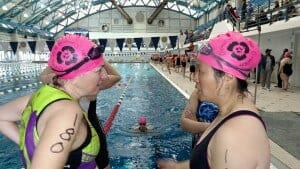 Right before the race, the EventPower LI organizers asked all the women to line up by their 400m times. Even though I asked my coach, Danielle Sullivan of Iron Fit Endurance, where I should start, I totally forgot what she said. So, I stood with my friends at 10 minutes.

It was exciting when the first woman went in the pool and took off. Everyone cheered. We inched our way to the front of the line and before long, I was next. I hit my Garmin 920xt and started the triathlon. I sat at the edge of the pool and slid in. 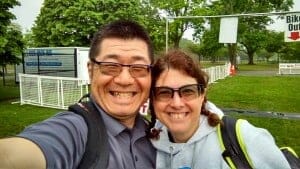 While I was swimming I felt amazing. I passed the first woman in front of me and continued to pass a few women on the left.  However, there were times when others were trying to pass but they just stayed left and there wasn’t any room to pass, which was frustrating. I didn’t go out hard. I went out nice and easy and before I knew it, I was at the end of the pool, climbing out.

As I exited the pool, I saw Lisa Laws, one of the leaders of AWTT. Lisa is an Ironman and an incredible athlete who I met last year at the Mighty Montauk Sprint. “You got this Hilary,” she said as I ran passed her.

I ran over rocks and into the transition area. I hurried to put on my bike shoes and helmet and then dismounted the bike. “Do I have everything?” I said out loud but no one turned to look at me. Everyone was in their own zones.

I mounted on the bike, the way Eric, a bike fitter at Brand’s in Wantagh showed me, and I took off. I went slow at first until I got to the road and then I pushed. After the first half of the loop, I saw Marti. “Nice swim,” she said to me as she passed me.

I tried to keep up with her. I went into a hard gear and pushed. I was right behind her until another woman got in between us and then she was gone. I could still see her and tried to maintain her speed. I saw a few of my AWTT teammates on the bike course and cheered them on.

The bike course went fast and before I knew it I went around the loop three times. I slowly approached the transition area, dismounted easily off the bike and ran in. (I realized I didn’t have a Gu and I didn’t drink at all during the bike course, which ultimately hurt me on run.)

I had a little trouble taking off my bike shoes because my feet were so wet. But I got them off and put on my sneakers, which were also hard to get into. I took off my helmet and replaced it with a visor. I took a very quick sip of water and took off. 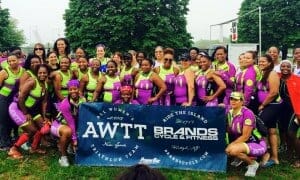 As I started to run out of transition, there was more water on the course. I stopped. I saw Marti’s coach, Jackie Fahey.  “Looking strong Hilary, you got this,” she said.  She was at the race cheering on all of her athletes and the athletes from the AWTT.

I ran on but had trouble with the grass. It was so difficult to run on because the surface was so uneven. I walked. I ran. I tried to run as much as possible even though the backs of my legs were burning. 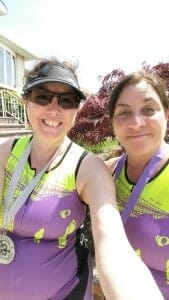 I was so happy to see some of my teammates on the course encouraging me and I was encouraging them. At the end, I felt totally exhausted. After seeing Tinnette Spann and some of the other women, I just gave it my all and ran over the grass toward the finish line.  My team was screaming for me. It was an incredible feeling.  I saw Megan White, founder and coach of AWTT, smiling. She and Lisa were so proud of all the women. 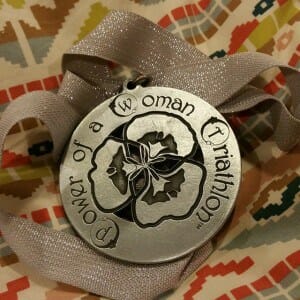 I crossed the finish line and received my medal. Unfortunately, as I was walking around the park, the medal fell off and all I had left was a band around my neck. I asked the EventPower staff for another one. They found one from last year and gave it to me. Although it was different than everyone else’s I still smiled that I accomplished my fourth ever triathlon.