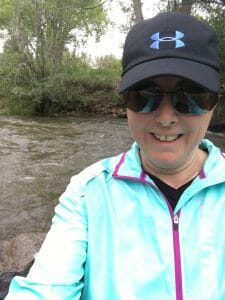 I went for a run while I was in Boulder, Colorado. I walked outside of the hotel and was unsure where to go. I usually ask the receptionist at the front desk, but this time, I felt adventurous. I’m not going to get lost (although I knew I would!)

I left the hotel and took a right, crossed over a bridge and then saw a running/bike path. Hmmm… should I duck in? I decided, why not!

I saw a couple of other runners and cyclists but not too many. It was quiet. I didn’t listen to music. I just wanted to hear “nature.”

I ran over a bridge and heard the sound of water rushing. I looked down and noticed there was a river under me… then as I ran, the river was next to me. It was so close, I could go over and touch the water. It was flowing fast and furious. I noticed a couple of guys fishing. I wondered if I would see anything they caught.

As I ran, I noticed signs for some sort of science center. I ran toward it. I had no idea where I was or where I was going. All I knew was that I was trying to practice running in the altitude before the BolderBOULDER race on Memorial Day in Boulder.

I got to the parking lot of the science center and took a photo. I couldn’t believe how gorgeous the mountains looked. Between the mountains, the rushing river and the cool fresh air, I was in love. 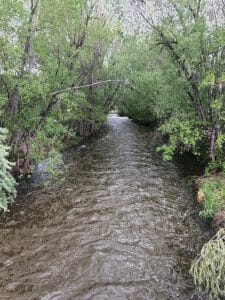 I turned around and headed back. If you know me, you know I’m directionally challenged. I don’t know why I don’t leave markers for myself, I should.

I ran passed the river, over bridges and came out of the park. I looked around but didn’t see the hotel. I saw a man with a beard holding a big dog. I waited until they were near me. The man had to hold the dog tight.

“Do you know where the Millennial Hotel is?” I asked.

“Yes, you need to get back on the running path and go under the road to the other side. You can’t miss it,” he said.

I thanked him and headed back under the road and over a bridge to the other side. I came out and there was my hotel. I smiled. I knew that this trail was going to make it on my top 10 list!