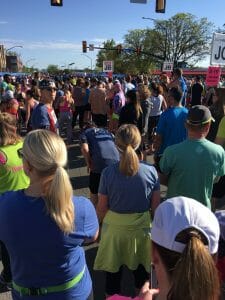 What really happens at BolderBOULDER?

When I got the email from BolderBOULDER that they were looking for bloggers to experience the race and to share with their community, I jumped at the opportunity. I hadn’t been to Boulder in years and I know a ton of people in Colorado.

I signed up. I didn’t know what to expect. Everyone including my coach told me to beware of the altitude and stay hydrated. I used to ski in Colorado all the time and I know first-hand what altitude sickness is like. It’s not fun!

The week prior to the race, I stayed as hydrated as possible. It was tough, since I don’t love to drink water but I forced myself. I did not want to get sick, especially with the hills that I would be running.

I was told that BolderBOULDER is a great race but I didn’t know how great until I ran it.

Now, some may disagree with me but I found this race to be the most fun race I have ever did, that includes Disney, NYC Marathon and all the half marathons in between. I’m not just saying this because I was comped a race entry, I really mean it.

The race took off on Memorial Day morning. Fifty thousand people from around the world were there to race. The first groups started at 6:50 am. My corral didn’t go off until 8:15 am.  What I found interesting was they kept the corrals small and there were lots of them. I also loved the fact that you didn’t have to get there at the crack of dawn. You just needed to be at your corral 15 minutes before. (I’m not used to that. I was at the NYC Marathon at 5:40 am for an 11 am start!)

Once our group was up, the horn blew and we were off. The whole entire town of Boulder and the surrounding areas came out for the race. There were more than 100,000 spectators.  The crowds were cheering and got involved in the race. 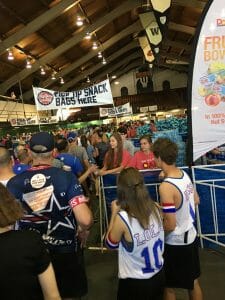 On practically every corner, there was a band entertaining us, belly dancers, crowds spraying water on us and people throwing marshmallows at us! There were tons of slippy sliders where many of the runners got off the route for a moment and slid down a slippy slide. There was even a Boulder resident offering their pool to take a quick dip before heading back on the race route. Everyone was there, including Elvis singing all his “oldies but goodies,” and there were even a bunch of bananas running alongside me.

There were two hills worthy of mentioning. I don’t think they were any worse than Central Park but because of the altitude, they felt harder! The one that I felt was the biggest “killer” was the hill entering Folsom Stadium. That was tough!

Once we got passed that, we all took a loop around the stadium. It felt as if we were in the Olympics. The stadium was packed with people watching and cheering. As we crossed the finish line, we were shuffled to an area where we collected our water, soda, beer and snack bags. There were no medals, but the snack bag was cool.

After that, and I must say, I felt totally claustrophobic when we were collecting our snacks. We were pushed through like a herd of cattle. I was glad it didn’t take too long because I was feeling the altitude. However, if I did pass out, I would have continued to stand up straight because people were all around me.

When I got out, I asked the security guard where gate 9 was. I wanted to check out the VIP reception.

The VIP reception took place in the sky box. It was amazing to watch the runners circle around the track. I was loving every moment of it. 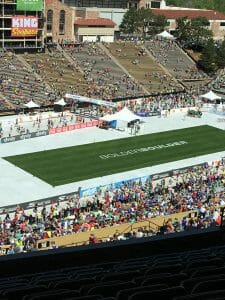 I ate a couple of Swedish meatballs to help stop the grumbling in my stomach and then headed over to Folsom Street to get on the Press Truck to follow the elite women runners.

I walked about a quarter to a half mile and loaded on a bus. The bus was open and sloped like stadium seats, but there were no seats. It was standing room only. The bus loaded up quickly and at exactly 11:12 am, the women professional runners took off. 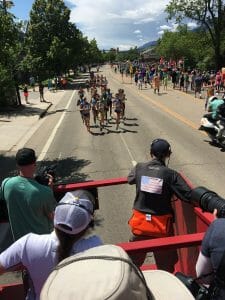 At first, they all stayed together with USA leading the pack. But quickly thereafter, the two Ethiopian women took the lead and gained a huge lead until the finish.

When we were close to the stadium, the truck sped up and we quickly unloaded and ran to the finish line, where we watched the first and second place leaders cross the finish line. We also watched everyone else cross the line. It was an incredible experience. 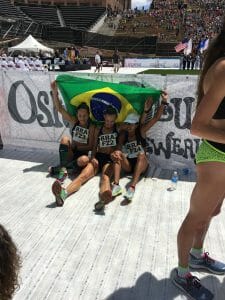 After the last professional runner came in, the Memorial Day festivities started. There were several announcements, awards and recognitions and then to end the amazing afternoon, military men flew down via parachutes onto the field holding flags for each area of our military. The last flag held was the American Flag. It was truly an emotional day.

Instead of watching the award ceremony, I headed back to the hotel. It was an amazing way to spend Memorial Day and it was probably the most fun I’ve had at a race! Thanks BolderBOULDER!