Long Beach, New York is a great place to run. They have a beautiful boardwalk that spans nearly 2.1 miles in each direction. The Snowflake Race is held every year in February. It’s usually the coldest (or one of the coldest) days of the year. This year, Team Galloway LI had the Snowflake Run on the calendar as part of our training for the Shape Half Marathon in April. 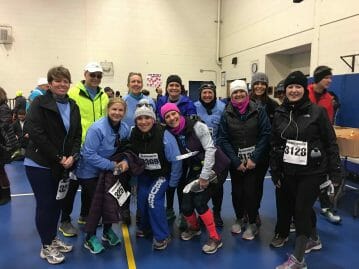 We arrived in Long Beach at 8:15 am for a hard 9 am start on the boardwalk. The temperature, with the wind chill was 6 degrees. It was cold! I wore, a Icebreaker top, a Smart Wool top over that and a thin down jacket. I also wore a face mask, hat and thick gloves. On my feet, I only wore my Balega Silver Socks and my Brooks Ghost 10 sneakers.

I was truly bundled up. When we got to St. Ignatius Church on Grand Blvd in Long Beach, we were handed our bibs and our long sleeve tee-shirts. I chose a size XL so that I could wear it over my jacket. (Yes, I did look like I weighed 400 pounds or you could think I was pregnant. I had a lot of bulk on me.)

It was great to see most of Team Galloway Long Island at the church. It was Michelle’s birthday so this was her birthday race and this was Ann’s first 4 mile race! Many of the members ran together in pairs.

When we got to the start line between New York Avenue and Grand Blvd, I was standing with Colleen, Merril, Linda, Ray and two of our new members. The horn blew and we took off. I decided to go with my 30/15 pace (30 run/15 walk). That one has always served me well and the 30 second break, I always feel is a little too much. (Hmmm, I should try the 60/30 next time though.)

There were a bunch of us who stayed together for mile 1 and then some either fell behind or ran ahead. I was quite content going the pace I was going, especially since I had work in the afternoon and didn’t want to blow myself out.

At one point, I guess around mile 2, I found myself pacing Linda. She was doing amazing, especially since she hadn’t run in a while. I was floored at how fast she was going. Actually, I was impressed at how fast all of the runners did. This program really is amazing. Everyone had improved significantly since we started a year ago. 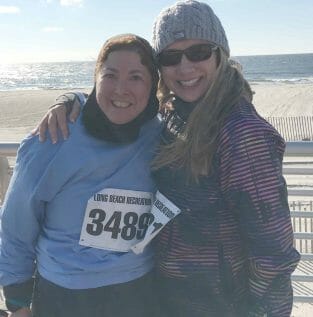 Although the boardwalk was nice and the water was beautiful to look at, all we kept focusing on was the cold weather. When we ran out, the wind was behind us. When we ran back, the wind was in front of us, pushing us back. It was tough. So, forget about the negative split on this one!

There was one water stop between mile 1.5 and 3.5. I guess it worked. It wasn’t ideal but good enough for this short race. As people dripped water onto the ground, the ground iced up.

About a week before this race, I purchased an entry to the virtual race – Bling in the New Year with Shoe Year’s Day Virtual Race through Epic Races in Michigan. (By the way, they put on amazing races. I just wish I lived closer!) I was excited to do this Snowflake Run to also get the bling from Epic!

Thinking back, a day later, it was a flat, but fun race. I’m glad I got myself to get out of bed and do it. And, for me the most meaningful thing was when Linda said, “Thank you Hilary, I couldn’t have done this race without you.” It meant a lot to me that she said that, but I know she’s strong and could tackle anything!

I am proud to also report that two of my members – Laura and Pat both got a podium medal for the race! 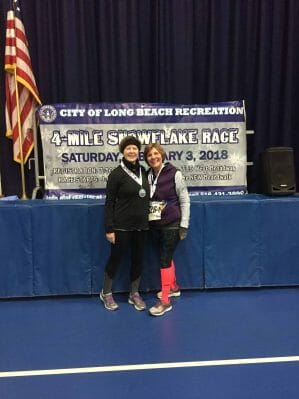 This team is amazing and the people are truly an inspiration. I can’t thank Jeff Galloway enough for letting me run a group on Long Island!

And, as for the race, would I recommend? If you’ve never raced in Long Beach, this is a good one to come out for. There were nearly 500 people, the boardwalk was clear for the race and you got to give Terry Bisogno a high five as he called your name crossing the finish line!