I joined Lifetime for a limited time, because once the season kicks in, I need to be outside. However, while it’s cold and nasty outside, I figured I would join a gym. I thought about less expensive options, but Lifetime seemed to give me everything I needed in one place, so I joined.

The other day, I tried a spin class. My coach called for a brick workout. She gave me a hard half hour on the bike followed by a run. Since the weather was lousy and I no longer have a treadmill, I asked her if I could do it at Lifetime. “I can take a spin class and then jump on the treadmill and run 2 miles,” I said.

So, in the morning, I arrived 15 minutes early for my first spin class in more than two years. The last time I took spin classes, I took it at Equinox with Tripp Dougherty. (BTW, he’s amazing!)

Jamal was teaching the class. I had met Jamal over the weekend at the indoor triathlon. He was great so I decided to take his class. 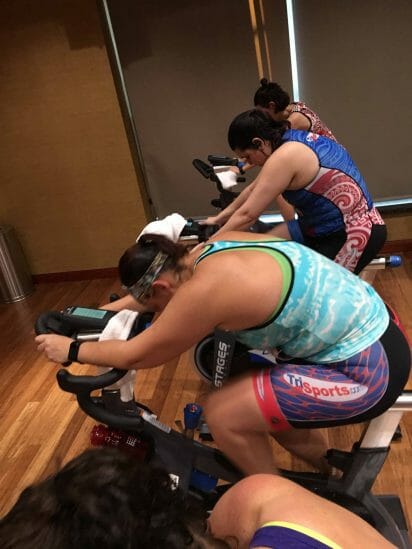 I got there and he helped me set up. It had been a long time since I rode a spin bike. He got started at exactly 8:45 am and suddenly the lights went out and flashes of light in different colors took over the room. I felt as if I were in a 1970’s disco!

He asked the class if anyone needed ear plugs and then turned up the music. It was an interesting mix of hip hop and pop. We stood, we sat, we peddled. Then he started to ask the class to move our bodies while on the bike in interesting ways. I guess it’s been a real long time since I did spin last because I don’t remember any of these moves.

When I felt like it wasn’t really right for me, I sat on the bike and pushed my watts and my speed. Although Jamal doesn’t look at that, I did. I wanted to tie it into my data (I must be a real triathlete).

“Elbows high and down,” Jamal screamed into his microphone. I watched in the mirror as everyone listened.

As we ended, he said, “You are strong, you are sexy and you can do anything. Keep believing in yourself.”

I smiled. He was right.

After class, I headed over to the treadmill for a short two mile run. When I was finished, I was a ball of sweat. Between the spin class and the treadmill (which by the way, they have incredible treadmills there.), I was beat.

I left and thought, I can’t wait until next time!