I’ve been training for triathlons for nearly three years and every year since I started, I look forward to the day that Bryan Krut of Open Water Swim LI announces the Robert Moses swim at sunset. 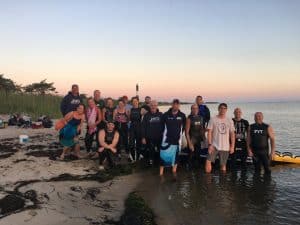 First off, if you don’t know how to get to the swim, it’s easy to get lost. My first time, I had no idea where this swim was. It’s not on the actual Robert Moses beach, it’s actually on the bay side. You get there by walking what feels like a long way when you’re in your wetsuit and flip flops, passed deer and bunnies. You walk out of the parking lot 5 to the road. You walk toward the Fire Island Lighthouse (yes, you can walk there from Robert Moses!) and as the road bends, you follow it to the other side. You will notice a tiny opening, that’s your cue to duck in and walk  toward the water on soft sand and through some weeds.

When you get there, you will notice a slew of boats in the water and a couple of bridges. If you face right, you will see the Fire Island Lighthouse again.

Open Water Swim LI meets on Wednesday evenings, an hour before sunset. We typically swim from Robert Moses passed the Fire Island lighthouse and back for approximately, a total of 1500 yards.

The swim is no joke. It’s tough. It’s probably one of the toughest swims on the Island. If you’re lucky, the tide is with you in one direction and on the way back, it’s nearly impossible to fight the current, but somehow you do.

Thankfully to a swimmer friend, Cathy, I learned that current is just another opportunity to stay longer in the water. “If you think that way, you will get through it… just enjoy it,” she said. 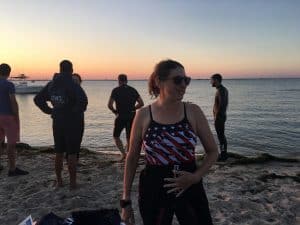 The first swim of the season was on July 5. There were at least 20 people there, maybe more. Many of the swimmers were practicing for the Cross Bay Swim, which is a 5K swim in challenging water.

I put on my long sleeve ROKA wetsuit, my bathing cap, and my goggles and walked into the frigid water. Most of the swimmers who walked in with me had already taken off toward the Fire Island Lighthouse. I tried to get acclimated first and then dove in. Once my face got used to it, I felt better and got myself into a rhythm. Before I knew it I was in Fire Island. Boy that went fast, I guess the current was with me. So the fun part will be going back…

Although there was a strong current, it wasn’t terrible getting back. I tried to relax and think about what Cathy said. It helped. It’s not a race, it’s a fun swim in preparation for a race.

As I was coming back, I was blinded by the sun setting in front of me. It’s bright yellow color illuminated the water and all I saw where flashes of light in front of me.

When I got to the end, there were a bunch of swimmers talking. I stood by them and listened. Then I swam over to the shore. Interestingly, as I got out of the water, a colleague from HJMT was sitting on the sand. I hadn’t seen him in a year or so and I think he was as shocked as I was to see him.

We chatted for a while and then I spoke with a few other people on the beach. Before I knew it, the sun was low in the horizon and it was time to go home… What a wonderful evening!