Every race tells a story and with every race, there’s a story to tell. I signed up for the SmithPoint Triathlon, produced by EventPower LI, nearly six months ago. I planned on competing in later triathlons this season. (I actually signed up for the Rev3 Williamsburg Triathlon, but with my house move, it was impossible to be able to take the time out to do that one.)

The day before the Smith Point Triathlon, I stayed at a friend’s house nearly 10 minutes away from the race site, which was a definitely plus, and enabled me to head over to the site at 5:00 am.

Transition was uneventful. I saw a bunch of familiar faces as I laid out my transition mat and gently put my helmet, cycling shoes, sneakers, visor and the rest of my gear out in an organized manner.

I saw my friends, Shirley, April and Megan, from All Women’s/Men’s Tri Team. Megan was coaching the two other woman, so she wasn’t racing. Shirley and April looked strong and ready. I felt strong and ready too. This was my first triathlon of the year. The last triathlon I did was a year ago when I competed in Tri the Wildwood, produced by DelmoSports in New Jersey. 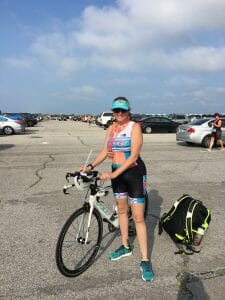 After saying “hi” to a ton of my Tri/Facebook friends, I made my way down to the water. I had my wetsuit on so I was ready to take a practice swim. I didn’t feel nervous. I felt very relaxed.

As I was entering the water, I saw my friend, Laura, getting out of the water. We talked for a bit and she helped me zip up so that I could take a practice swim.

When I got into the water, it was calm. I easily made my way to the yellow buoy, treaded water for a few minutes and then came back. The beach was rocky and some of the rocks were sharp. I decided that when the race started, I would try to swim, like Bryan Krut of Open Water Swim LI, showed us and attempt to do a porpoise, without looking ridiculous.

The water was perfect and I just couldn’t wait for the start of the race. I think the swim is probably my favorite part.

As I was getting out of the water, I noticed everyone was standing facing the flag. I took out my ear plugs and heard the Star Spangled Banner. That was my clue that the race was going to start momentarily.

I waited until the song was over and got out of the water. I went back to transition to get another pair of earplugs, a fresh pair and then lined up for the race. I was in the “yellow” cap category, women 40 and up. It was a big group. Actually, it felt like all the waves were pretty big. We made our way back to the water and stood there.

I saw Laura again. “We need to go out and around to the buoy because of the current,” she said. I agreed and followed her. The waves took off, one by one. We had three or four minutes after the last wave to take off. Those minutes felt like hours as we stood there in the water.

Next thing I knew, we were taking off. I started swimming but there were so many women on top of me. I felt as if I were in a wrestling match. I was getting kicked, pulled and poked. That wonderful swim that I experienced during the practice swim was lightyears away. Now, I was on a battle ground and had to hold my place otherwise, I would be left out in the dark. I tried to push through it even though at one point someone poked me so hard in the eye and my goggles pressed even harder into my face. It just made me want to swim harder and try to get around everyone.

I existed the water. Although a bit painful, it was quick. I tried to run into transition but the concrete was rough so I did the best I could. I got into transition, pulled off my wetsuit, put on my cycling shoes and helmet and ran out with my bike. I saw some familiar faces as I was running out. There were several people doing a relay, which I found a little odd since this was a short sprint. I said hello to some of the relay folks as I exited but they were in their competitive mode and didn’t say hello back. That was okay. I was focused on the moment.

This was my hard part of the race, the bike. I ran to the mounting station and slowly and carefully mounted, clipped in and stood. My internal voice said, “GOOOOOOOOO!!!!!”  And, I went. I tried to go hard. I didn’t have my Edge 1000 and my Garmin 935 wasn’t working right (I later found, I left it on swim mode the entire time!), so I didn’t really know how fast or hard I was actually going. There were some people who went faster than me and I went faster than others. The road was great, not that many potholes and the police were incredible. They kept the cars away so that you felt safe the entire route out and then back. I saw Shirley on the bike. She passed me. She was going strong.

During most of the ride, I was alone and I liked it. I went as hard as I could and at times I felt like I was going fast. At one point, I passed a man on a bike and he said, “keep it up. I suck at riding.” I shouted back, “I suck at riding too.” He screamed, “stop, you look amazing.” He made me blush.

I went over the bridge and around the turn to the bike dismount. I got off with ease and ran the bike in. I saw Megan and she screamed, “you go girl.” She made me smile and realize how much I missed the AWTT woman (great group).

I put on my Balega socks and my Skecher sneakers and took off. I decided to do the 30/30 ratio for this one. I felt like I went hard on the bike and wasn’t sure if I could do longer. The 30/30 gave me an opportunity to do 1/30 or 90/30 too so I felt that was the best choice for this run. I kept playing cat and mouse with a number of people, many of whom were in my age group. I saw Christine on the run. I had met her and her running partner at Open Water Swim LI. This was her very first triathlon and she was doing good. “I’m cramping like no other,” she said.

She continued to run without stopping and every time I caught up, I ran faster. “I’m using the Galloway method,” I told her.

I saw my swim friend, Steve, on the run. We ran for a few minutes together and he said, “I can’t sustain this pace,” so I continued. I kept going back and forth with a bunch of other people and then, the end was near.

Someone shouted, “it’s just under the tunnel.” I kept going. I heard Megan and some of the AWTT women shout my name. I made it to the finish line. I felt good, no actually, I felt great.

As always, I was grateful to the volunteers, especially to my friend Carrie. She’s an amazing athlete and had an injury, so she was out. I kept seeing her along the entire route and every time I saw her, she shouted out my name. It helped me go harder. Thanks Carrie!

I was also grateful to the police and the entire EventPower LI team for organizing yet another outstanding race. I’m definitely going to put this one back on my list for next year. It was fun, flat, fast and great to be done by 8:30 am!  I texted my coach, Danielle Sullivan of Iron Fit Endurance. I gave her my splits. She made me feel good when she told me that I PR’d the race.

I felt even better knowing that I had the whole day in front of me, which consisted of going back to my friend’s house for breakfast and then meeting up with my son, daughter and daughter’s boyfriend for a wonderful dinner. What a great way to spend a Sunday! Thanks EventPower LI!