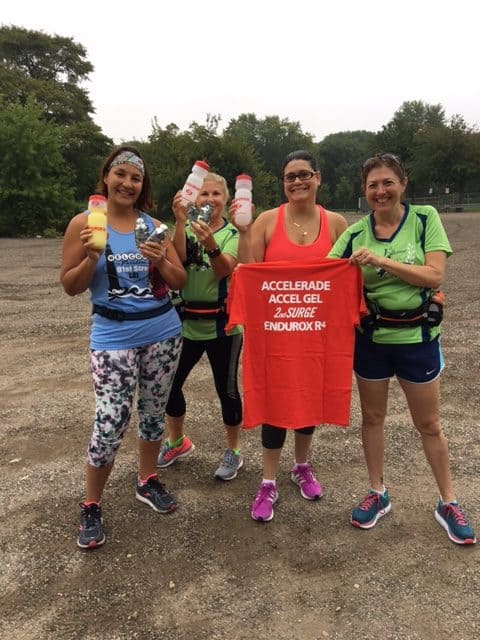 I was excited when Pacific Health Labs told me they would send me some product for the Team Galloway LI to check out. Most of the runners in the group are new to running and I wanted to give them good information, unlike the information that I had when I first started out.

Prior to our 9-mile run at Massapequa Preserve, I handed out Accel Gels in Key Lime and Chocolate. We only had six people attend the training that day. Two of our members did it on their own and the rest were sick or had prior commitments.

I had Accelerade lemonade, which tastes just like lemonade. We went the 9 miles. We went at an easy pace. When we got to 4.5 miles, I suggested to the group that we suck on an Accel Gel. We sampled both Key Lime and Chocolate. (To me, the chocolate tastes just like chocolate pudding. Yummy!)

On our last mile, we picked up the pace to make sure we had a negative split. At the finish line (or after 9 miles), I ran to the car and got out the already mixed bottles of Endurox R4. Everyone got a chance to sample the fruit punch and the orange. Both were refreshing after a long run and the best part, it’s a 4:1 ratio (carb to protein).

Studies have shown that compared to conventional recovery drinks, Endurox R4 increases glycogen replenishment by 128%, decreases muscle damage by 36%, increases protein synthesis by 400% and increases endurance by 55% in subsequent workouts.

We all loved both drinks, but again, my favorite was the chocolate because it tastes just like chocolate milk.

Since I had some leftover samples, I brought out to the five and 11 mile runs. Team Galloway LI was thrilled!