I was excited when the folks from the Rock ‘N’ Roll Marathon series approached me to run the San Jose 10K and then write a story about my experience. These races have been on my bucket list for a long time. I have often wondered about going overseas and running a Rock ‘N’ Roll Marathon, but for me the dates never worked out. This was my first time running one! 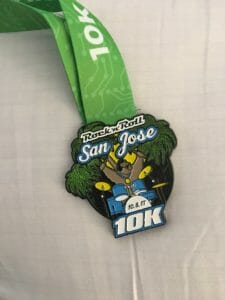 I decided to make a long weekend out of the experience. I flew into San Francisco, stayed over one night in Berkeley, picked up my son, Derek (who goes to UC Berkeley), and drove with him to San Jose. San Jose is about an hour from Berkeley.

We arrived in town on Friday. I was a little concerned, as I checked into the hotel, whether or not I would actually run. I got hurt when I visited my son in Berkeley and my knee and hip were really bothering me. Thankfully, by Saturday, with the help of a heating pad, Biofreeze, Tiger Balm, Ice and lots of fluids, I felt a lot better. 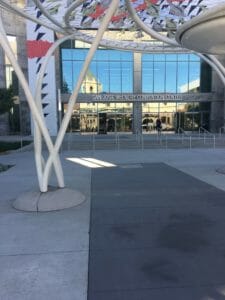 Derek and I went to the expo, which was located at the San Jose Convention Center. (BTW, it was probably one of the nicest convention centers I had ever seen and I’ve seen a lot!) It was modern, had lots of glass and was perfectly situated in the middle of the city.

We walked in. There were no lines and we quickly picked up our numbers. My son decided he would join me. It was not planned. He wanted to walk around the city and what a better way to do it? I was a little concerned because he’s not a runner but he does walk a lot. Berkeley is very much like San Francisco, very hilly. They don’t just have little inclines. The hills there are huge! So I figured he would be fine, especially since we were going to do the Galloway method together.

Some of the outstanding booths at the expo included Brooks, CEP and Toyota. We even got an opportunity to drive a Toyota to get $10 off at Brooks, which we both did. I tried the Prius and Derek tried the Rav4. It was a pretty cool experience… I don’t know if I would trade in my car, but I did like the Toyotas. (I actually had one in my 20’s. It was such a reliable car!)

The $20 was used toward a pair of running shorts and socks for my son! I bought myself a cool San Jose Rock ‘n’ Roll T-shirt!

The expo was interesting to me especially since there were a lot of the west coast race companies there. I had never heard of many of them before. There were people giving away flyers and information and I noticed that Big Sur Marathon was there, a bucket list of mine!

After the expo, we went back to the hotel, went in the hot tub for a while and then went to dinner at a local Italian Restaurant to “carb up.” 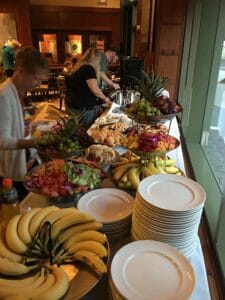 The next morning, we woke up at 6 am and attended the pre-race VIP breakfast, held at McCormick and Schmick. The continental breakfast was lovely, much nicer than the VIP experience at the NYC Marathon. However, I couldn’t eat. My son ate a little. I was just happy there were real bathrooms (as opposed to port-a-potties).

At the breakfast, I met a young woman who asked me to pin her bib in the back. She proceeded to tell me that she broke her leg in three places last year and the doctor told her she would never run again. She was an elite athlete. This year she ran TEN Rock ‘n’ Roll Half Marathons! I was in awe! Amazing! 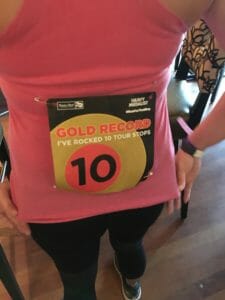 At about 7:45 am, my son and I walked about two blocks to the start line and stood in our coral. I noticed that many of the tech companies were represented, including: Google, Paypal and Strava. There was something special about that! 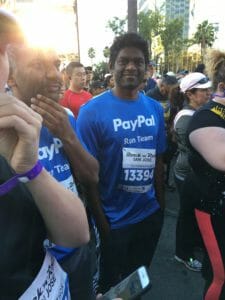 As we stood there waiting, it felt like eternity.

Then we heard the first group take off, then the next and so on. All of the half marathon and 10K people stood together. There was no differentiation, just the color of their bibs. (I was a little nervous about continuing and not taking the U-turn for the 10K folks but I had no need to worry. The course was very well marked and all the volunteers were incredibly helpful.) 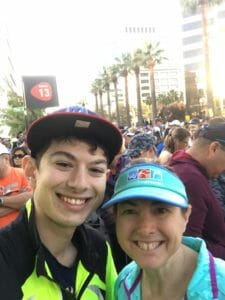 I didn’t know if Derek would stay with me but he wanted to. For a while, we played cat and mouse. We would run together then he would walk faster, then I would run to him then we would walk, etc.

As we ran around the city of San Jose, I was impressed with the cleanliness of the area. We ran through many different neighborhoods and my son and I were surprised that the Jail and the Juvenile Delinquent area were right in the middle of town. We ran passed them. I was so focused on the timing and my running that I became unaware of my surroundings. I felt as if I could be anywhere! And, the time just flew! 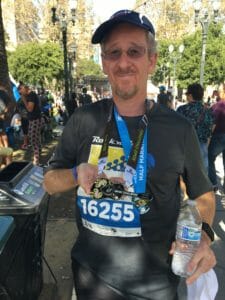 There was music and entertainment on the route. The one that stood out to me was the “Original Driveway Band.”

The route also had lots of local cheerleaders and the crowd was involved with the runners. There was one family even giving out “free hugs” to all the runners. 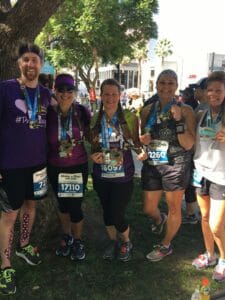 We started to step it up at the last mile. I felt amazing. He was hurting a bit but wanted to keep going strong. So, we stepped it up and ran to the finish line. We crossed the finish line together.  I was so proud of him for finishing the race, coming in strong and sharing the experience with me! (And we even had a nice negative split.) 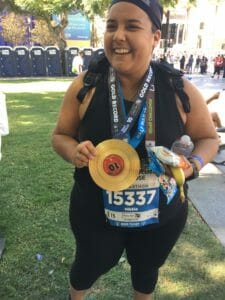 After getting our medals, we noticed that there were lots of people who had different medals. Some people had Remix medal, which was doing two events in one weekend. Others had Beach to Beach and others had 10 race medals. They were incredible! Makes me want to go for a big goal to get one of those cool medals!

I particularly loved the Brooklyn/San Francisco medal – Coast to Coast! Maybe I’ll do that next year! 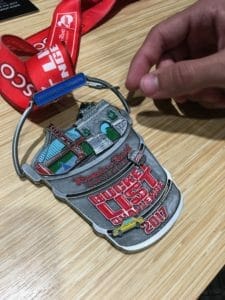 We took quick showers at the hotel and returned downstairs back to McCormick and Schmick for a full breakfast. 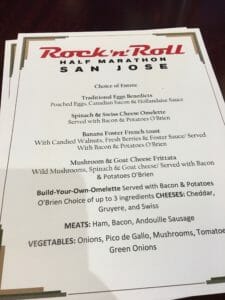 Unfortunately, the breakfast was nothing to write home about. I thought it would be amazing after seeing the menu but, there were so many people and the servers, particularly the one that waited on our table, were inundated with requests. No wonder they got our order all wrong. (I ate it anyway because when I asked for something different, I was told that there was one breakfast per person.) I think they would have been better off having a buffet instead of wait staff.

All in all, the race was amazingly fun. The organization was great, although there were times when the volunteers weren’t sure what was going on they were still helpful. The medals were fun and the people were incredible! We had a blast and I would definitely consider doing a few during the year!  As a matter of fact, after seeing those cool medals, I yearn to be a groupie! 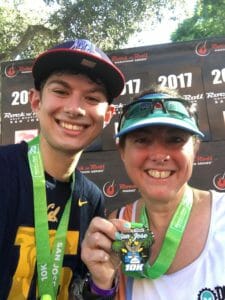