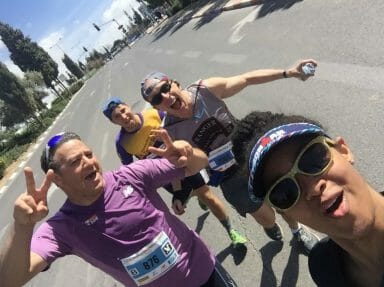 I was excited to run the Jerusalem Marathon for a full year, since the moment my friend Daniel invited me to come back to Israel (where he lives) and run it with him. Even though I had done the NYC Marathon 3 times, training for the Jerusalem Marathon was different, because I needed to train outdoors on the hills, in the cold, in the wind, through the New York winter.

It was no easy feat to get up and prepare, mentally and physically, to go out and run 16, 18, 20 mile runs in 30 degrees, when at best your friends are only running 3-6 miles at a time casually, because most of them were not training for a race, but just keeping their wheels spinning, so speak. Once I got out there however, I was fine. It was the setting aside of several hours on my off days to run in the cold alone, that was never an overly exciting idea. The vision of finishing a dream race kept me going in every training run! And once each run was done…I was on top of the world.

I was surprisingly more terrified for this marathon than any other. I was terrified of the hills of Jerusalem, that everyone warned me often of, and had no idea what was going to happen race day. But I was going to get out there, find out and conquer it. My nerves were out of control the night before and morning of. I felt like I was going to vomit, even though I had completed 60 other races of nearly every possible kind. Once we got to the race start my fear turned into extreme excitement! I was there and I was doing it! Training all those cold months sola, and finally seeing thousands of people who also trained and were there to victoriously finish their part of this journey together lit my spirit on fire.

I was very careful about my race day nutrition, having strategically practiced what works for me during long runs and other marathons. I also heard that in this race they gave out things like dates and oranges for nutrition and I was going to need a little more than that to get through a marathon. For me, it was a calculated amount of Base Salt and Cliff Blocks. I had to be careful not to over-hydrate because in the Jerusalem Marathon they don’t do small cups of water like most other races I have participated in. At every water station they handed you a full 20oz bottle of water. Running for several hours, in a little shy of 70 degrees Fahrenheit, I wanted to chug the whole thing, but had to hold back and just drink a few sips at a time.

As expected, running through Jerusalem there weren’t millions of fans, like New York, but I was thrilled to see how much musical entertainment there was along the course. It was great—a combination of live bands, DJs and excited people singing karaoke off of their 2nd and 3rd floor apartment terraces. Lots of IDF (Israeli Defence Forces) soldiers and local police lining the course with smiles and cheering. 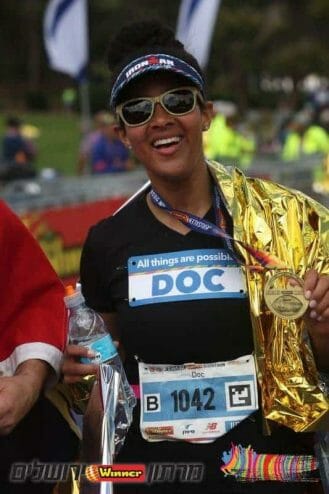 The scenery, in the epic, rolling hills of Jerusalem was indescribable. Palm tree lined streets, beautiful old neighborhoods, and overlooks that see the Dome of the Rock, the walls of the ancient Old City of Jerusalem and the Kidron Valley…views you will never see in any other race.

A little after the half way mark, I entered the beautiful, ancient walls of the Old City of Jerusalem and I burst into tears, thinking about what Jerusalem means to my family, as Jews, to me personally, being ethnically Jewish and religiously Christian, what a true dream come true this was to actually be there, doing it! I also thought of how proud my father would have been of me. He passed away from liver cancer just over a year ago. He was the one who taught me to swim, to ride my bike and to run. He was proud of every single thing I ever did, even things that most parents aren’t proud of.

I never had it in my mind to PR this race, knowing how hilly and warm it would be, so I enjoyed every moment and greeted people along the way, stopped to take photos with soldiers and of the incredible scenery and even made friends along the way! I noticed I was playing tag with a small group of men for several miles, and after the half way point, I discovered they speak English because they were cheering “Empire Tri Club – New York City” (because I was wearing my team shirt), and we had a mid run chat, decided to stick together and help each other through the challenging remaining miles. It was great and I had a new little team for the day.

The finish festival was dreamy, or at least it felt dreamy because I had actually finished the race. I was slow—with all the hills, but significantly faster than I had imagined. I thought it was going to take me an hour longer to complete this marathon than my typical finishing time. And well—in retrospect, that was quite an unreasonable fear/expectation. I ended up being about 15 min slower than my typical NYC marathon time. Then I found the massage tent—Heaven on earth. He laid me out on the grass and rolled and rubbed everything that needed to be rubbed. My day was complete, and it was only noon.

I highly recommend the Jerusalem Marathon. It was difficult, but what marathon isn’t? And what great victory comes without a great challenge? The temperature was fine in a t-shirt, and it was hilly. But it was spectacular. If you do this race, give yourself a few good days before and after the race to enjoy Jerusalem and it’s beautiful people and culture. It is safe. You will be welcomed, and you will love it.

My name is Doc Halliday Golden. I’m 35 and live in North Bergen New Jersey. I work in Times Square as the Marketing Manager of a non-profit organization. This is my 4th season doing triathlon, and I have completed a little over a dozen tris between sprint, Olympic and half ironman distances. I did track and field and volleyball in high school, in the Catskills, and started doing road races in NYC in 2010. I am a coach for the Beginners program in the Empire Triathlon Club and also coach a small, local community run club. I am a first born, and type A like many triathletes. 🙂 I’m single and have no children.